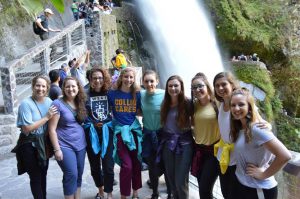 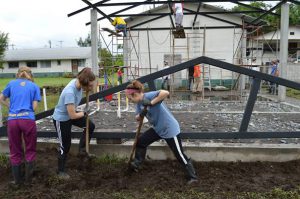 An Inner-City Outreach (ICO) trip is a mission trip where Grove City College students go out to a certain city, some in the US and some abroad, by themselves and do different missions work while also experiencing the culture of the place they are traveling to.

Sophomore Rachel Puls, who is an Elementary and Special Education major recently went on an ICO trip to Shell Mera, Ecuador from December 27th to January 7th. Rachel went to Ecuador with a group of 15 other Grove City College students. I asked her what made her decide to go on this ICO trip, and she said, “I always knew that I wanted to eventually try a missions trip, so I impulsively went to the meeting and applied and got in.”

Rachel said she absolutely loved her experience on this trip and would love to eventually go back. While there, the team built a workshop for the people living in the jungle to take classes and learn trades/skills that will help them to get jobs and sell their merchandise in the future. They also did some connecting with the Waorani Indians and people living in Ecuador as well as authentically experienced the culture and some of their traditions since they were there during New Years.

I asked Rachel if she would recommend going on an ICO trip to others, and she said, “Going as far as I did is definitely not something for everyone, but I would encourage people to try at least one in their lifetime, even if it is just in your neighboring city.  It is something that can really open your eyes to the Lord and help you to grow in ways you never thought possible.” This was Rachel’s first time going out of the country, and she said it was a great way to do it, and a way to truly experience other cultures.

She said her favorite part of the whole experience was being able to connect with so many people and not being worried about worldly or outside things, just being concerned with experiencing authentic communion together. I asked her if the trip met what she expected when signing up, and ultimately traveling there, and she said, “In some ways yes, but I also did not set many expectations and this trip went above and beyond for what I thought was going to happen and what I was going to see and experience.” She said the only downside to the whole trip was that some of the members of the group got sick toward the end, which was not the best.

Rachel said her favorite memory from the trip was when one day the team was hiking through the Amazon Jungle and she got to cut down banana trees with a machete!

Here on campus Rachel is a part of the ICO Ecuador team, and she is also a member of the Gamma Sigma Phi sorority, the Homecoming Committee, and a co-captain of the Women’s Club Lacrosse Team.