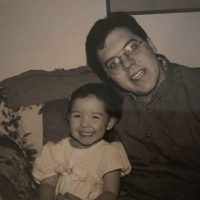 By Krista Heckman on March 24, 2017 in Faculty Spotlights, Inside Student Life

After attending Grove City College as a student, receiving his diploma, and then coming back a ‘second time’ around after completing graduate school, Dr. Michael Coulter now teaches political science and humanities for his alma mater. Although Dr. Coulter enjoys the Christian environment of the college, what he really cherishes is the ability he has to be active in the college life of his daughter, Caroline Coulter. Caroline, a sophomore majoring in marketing with a minor in theater, walks the same halls and eats the same food in Hicks as her father, because they share the privilege of teaching and studying at the same college.

Caroline is very active on campus with theater, where she is in the College’s spring play, as well as an active dance member in Orchesis and Spring Dance. Her free time outside of classes is filled with practices, homework, and Greek life, while Dr. Coulter is busy grading exams, preparing for lectures, and providing for a family of nine (7 KIDS & 2 PARENTS). It is quite clear that the Coulters stay busy both on and off campus. Father and daughter agree that they do not see each other on campus frequently unless they make an effort to get together. Caroline shares, “I see him in passing in the hallways, or I’ll see him in his office, but that’s about it!”

Even though the Coulters may not see one another regularly, both agree that when they do see each other, it is a pleasant surprise. Both concur that attending the same college has allowed their relationship to grow and deepen through the bonding and connections they experience on campus. It is easy for them to understand what the other is talking about and the traditions that are rooted in Grove City College.

As most would guess, there are also challenges that come with having a family member on campus, and some are more difficult than others. Dr. Coulter shares that he is constantly double checking his pockets for his car keys because of sharing the family van with Caroline and the sometimes “foggy” lines of communication that result in a misunderstanding from time to time Moreover, Caroline shares that being a professor’s daughter brings with it a higher expectation and standards. Some professors know Caroline on a deeper and personal level, which makes her an easy target to call on in class, perhaps more than they would other students. “Sometimes I feel as though I have standards to live up to as a professor’s daughter,” Caroline shares.

Despite the challenges, both Coulters agree that they would not change their decision to choose Grove City College, and thoroughly enjoy the growth in their relationship. The unique opportunity is not taken for granted in their eyes and they hope that Caroline’s younger siblings will seize the same opportunity and consider GCC to further their education. As the second oldest of seven children, Caroline is pretty confident that another Coulter or two will probably follow in her footsteps.

View all posts by Krista Heckman →
Alumni Stories: An Interview with Julia Allan ’04
Minor in Robotics