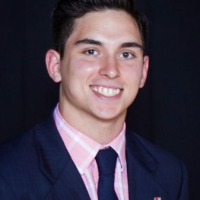 Larry Thompson graduated from Grove City College in 2017 with a major in Accounting and Finance. As the first in his family to graduate from a four-year college, he is now successfully working on his future Certified Public Accountant title. Larry currently lives in Charlotte, NC working for the accounting firm RSM U.S. LLP audit, tax, and consulting services. While enjoying his life down in North Carolina, Larry is also benefiting from the perks of his company. A major perk he has in mind is traveling. In the past eight months he has been able to travel to Dallas, Texas; Charleston, SC; New York City; Atlanta, Ga.; and Greenville, SC. Larry looks forward to traveling more in his future.

When asked about the CPA exams Larry replied, “I worked on studying every day. I woke up and went to the public library to free myself from any distractions from 9 a.m. to 5 p.m.” He then stated that he had three out of four exams already completed before he started working for RSM U.S. Being put into his job during busy season, Larry could not really focus on passing the fourth exam; he had to work hard and study even harder in order to prepare himself for the final module of the CPA exam. Soon after the busy season, he ended up passing his fourth and final exam. His next move in his career is to work for RSM U.S. for a year, but in order for him to obtain his CPA title, he must pass all four modules and work for an entire year to become officially “certified”.

A motivational part of Larry’s experience with the exams is the way he went about taking them. Larry stated, “I took the exams in order from hardest to easiest [in his own opinion].” He believed that if he could pass the hardest exam, then the rest would be easy. His motivation to pass in this order kept him dedicated to studying and keeping on top of things in order to fulfill his dream of becoming a CPA.

Ideally, Larry plans to work for RSM U.S. for two to three years and then reevaluate his options after being certified. He wants to end up in Wealth Management or become a stay-at-home father who does technical stock analysis trading. His dedication and commitment to becoming a CPA has already and will furthermore open up doors in his future.

Larry finished the interview by stating a word of advice: the Career Services Office is extremely helpful. He acknowledges that they want the best for students here at Grove City College. Career Services should be taken advantage of more often to set up a student’s future and career. “Make friends with them, and do not ignore them,” Larry stressed. He believes they have truly helped him further himself earlier in finding jobs and even more so now during work.