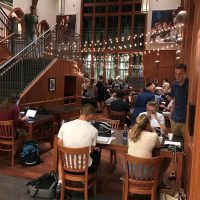 Tuesday, Oct. 9 featured the kickoff Coffee House concert hosted by the Student Government Association (SGA). The group took over the Student Union by setting up the stage for the six musical acts that performed. Each band was given a 30-minute time-slot to perform their favorite songs in front of their peers.

SGA provides coffee and food for these events, which take place monthly through the entire year on the first Tuesday of the month. This month, members of SGA’s social affairs committee baked homemade sweets for students to enjoy. Things like pumpkin rice krispie treats, cake pops, and more were enjoyed by students. They were such a hit that students cleaned out the entire supply about half way through the event. This event was also so well attended that coffee also ran out at about the same time as the food, which has never happened at one of SGA’s coffee houses before. The group is already prepared to make the appropriate adjustments for the next iteration of their event in November.

Also at this event, SGA ran a social media competition on Instagram where if students posted with the hashtag #gccyeti on Instagram they were entered into a drawing to win one of five mini travel size Yeti cups. The drawings took place after the event and students were awarded their Yetis.

Coffee houses have been one of SGA’s events where they continue to strive in improving. Last year, bands had to audition for the first time to make sure students attending the event would experience the best musical performances they could see. This small change improved the event by a significant amount, which continued into this year. While plans are still in the works for November’s coffee house, be sure to check back here for another event review, and go ahead and follow SGA on Instagram at @gccsga.

Garrett is a senior at Grove City College majoring in Communication Studies and minoring in Entrepreneurship and Design.
View all posts by Garrett O'Toole →
The Beauty of Sleeping
Favorite Aspects of Grove City College – The Professors