By Addie Fox on October 12, 2015 in Campus Events, Faculty Spotlights 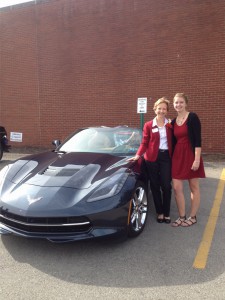 g at Grove City is a time of fun, hanging out with old friends, and networking with alumni. However I had an opportunity that put all of those on the backburner….I was asked to drive President McNulty and Mrs. McNulty in the homecoming parade! (Let me just begin by saying they are without a doubt the
sweetest, most humble couple!)

Having never met Grove City’s First Family, I was extremely nervous about the prospect: President McNulty was Deputy Attorney General of the United States and Mrs. McNulty is a style icon! If that isn’t intimidating enough, I was driving them in someone else’s 2014 Stingray Corvette…no pressure right? As time drew near for the parade, I began to think about what I would say to them; as a senior graduating in December, this may be my only chance to talk with the couple one-on-one. I began reminiscing about my time at Grove City, my professors, all the classes I had taken, but how do I begin to shed a light on how much I have grown since coming to this wonderful school? Grove City is more than a school, it is a community of people devoted to their values and the pursuit of education. 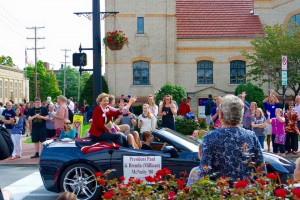 As I woke up on the morning of the Homecoming parade, I realized what I would say: nothing. Nothing I say could ever fully, adequately describe my experience at Grove City. Instead I would focus on actively listening; the amount of wisdom the McNulty’s have surpasses anything I as a 21 year old college student could ever comprehend. So as the day passed and we prepared for the parade, I listened. I listened as they spoke with former GCC President Dr. Charles S. MacKenzie, Marathon Executive Vice President Donald Templin ’84, and other Grove City legends. As I drove them down Broad Street past the crowd of cheering people, it all began to hit me. Grove City will always be with me. The information I have learned and the people I have met will stay with me throughout my path in life. President McNulty never imagined that his path would lead him back to Grove City one day, but to him it is home now. That is what Grove City will always be to us whether we move away to follow a career, choose to settle here, or simply return once a year for Homecoming: it’s home.

Addie Fox is a senior at Grove City College, majoring in Business Management. Addie is secretary of the Grove City Gun Club and she enjoys doing anything outdoors, whether that be hunting, fishing, or hiking. Addie also spends significant amounts of time spoiling her 5 year old niece and 4 year old nephew.
View all posts by Addie Fox →
Connecting with the Future: Career Fair 2015
From Afghanistan to the Grove: How a Little Piece of Shrapnel Changed Everything