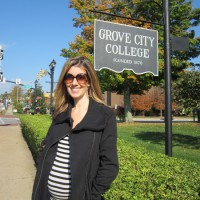 When it comes to finding your calling, there’s not always a recipe for success. As 2002 alumna Anna Watson Carl can attest, sometimes you have to start from scratch. Though she now enjoys a successful career in food and journalism, it’s been quite a journey for Carl—one full of excitement, uncertainty, and a few tossed crepes.

As her passport will reveal, Carl’s world has certainly gotten bigger since graduating from the Grove. Still, she was glad to return to her alma mater to kick off this year’s Communication Pathways speaker series hosted by the Department of Communication & Visual Arts. As Carl whet the appetite of every foodie and aspiring creative professional in the room, her story proved to be one worth sharing. 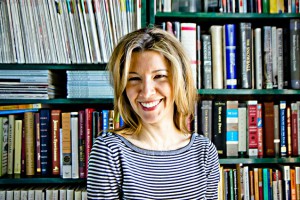 Before she could even spell crème brûlée, Carl learned to see cooking as a “way of life.” Back in the seventies, her mother bought a yellow table that became the hub of family life in the Watson household, where little Anna developed a homegrown appreciation for good food, conversation, and hospitality. At the ripe young age of ten, she tried her hand at chefery, whipping up an impressive four-course Valentine’s Day dinner for her parents that “birthed a lifelong passion for dinner parties.” This culinary curiosity didn’t come to full boil, however, until her college years.

When she joined the Grover fold in the late ’90s, Carl’s knack for writing led her to enroll as an English major. But when junior year rolled around, this southern-bred belle’s wanderlust whisked her away to France where she “fell head over heels in love with food.” While abroad, Carl’s eyes were opened to a vivid world of new flavors, fresh ingredients, and rich food culture in which “each meal was treated as an occasion to be relished—never rushed.” She also gained independence and an ability to thrive in uncertainty, both of which would come in handy down the road. 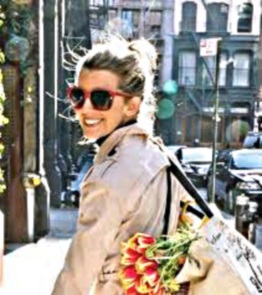 After returning to the Grove with a kindled passion for food, Carl picked up a French major and Communication Studies minor with hopes of pursuing some sort of creative career that combined cooking and writing. Through an independent study with Professor Betsy Craig, Carl took advantage of the opportunity to explore cuisine as woven through the cultures of Belize, France, and Portugal. She also started a restaurant review column in The Collegian and leveraged her work to land food writing jobs right out of college. The next few years brought a smorgasbord of formative experiences, from working in restaurant kitchens to starting her own catering company, writing restaurant reviews, editing cookbooks, hosting dinner parties, and eventually moving back to France to earn her Grande Diplome Culinaire in professional culinary studies.

Though a self-proclaimed Francophile with a weak immunity to the travel bug, Carl eventually “put down roots” in New York City, where she’s been soaking up the metropolitan excitement since 2007. After starting her blog The Yellow Table in 2011 as a platform to share recipes, inspire gatherings, and nourish stomach and soul, Carl set out to write a cookbook. But as a “medium-size blogger” without an established following, did she stand a chance? Maybe not in the opinion of the agents and publishers she first called up. But that didn’t stop Carl.

In a leap of faith, she began developing content with a small team of designers and wrote a blog series called “The Cookbook Diaries” to document the publication process and garner support. After daringly deciding to self-publish, she launch a Kickstarter campaign to raise $50,000 for the first print run. Knowing this “would require some unconventional tactics,” Carl set out on a month-long road trip, partnering with Whole Foods Market, Volkswagen, and GoPro to throw dinner parties in the homes of fellow bloggers and designers in eight cities across the country, from Raleigh to Seattle. When she reached the finish line, Carl surpassed her $50,000 goal by close to $16,000. Stunned but grateful, she realized afresh that seeking the impossible can be a worthwhile endeavor. “All you need is some creativity and elbow grease—and the courage to begin.” 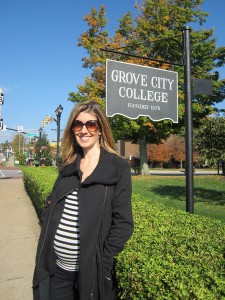 Since publishing The Yellow Table cookbook in 2014, Carl has continued to let her creative juices flow, generating recipes for Delish and sharing her insight on hospitality through her latest project, The Yellow Table Supper Club. Now living in Brooklyn with her husband Brandon, two cats, and a baby on the way, Carl hopes to keep making memories around the Yellow Table as she inspires others to do the same.

“Cooking is deeply important to me, but it’s community that I crave,” says Carl. It’s no wonder, then, that Grove City was the right choice. Though a cosmopolite at heart, Carl is thankful to have been a part of Grove City’s unique community, affirming that it was “a wonderful, wonderful place to grow in my faith and develop key friendships” with people of “real depth and sincerity” before taking on the real world full throttle.

For current Grovers who have yet to do so, Carl’s advice was encouraging: “You don’t need to have your whole future planned … Instead, try out different things to see what you like (and don’t like), ask questions, work hard, build relationships, find mentors, travel, and don’t be afraid to take risks.” Even if a dream seems too grand, Carl says, “sometimes when you stick with it long enough, doors will end up opening.”

Emily ('16) is a Communication Studies major with minors in Spanish and Biblical & Religious Studies. Spending a semester abroad in southern Spain helped to season her interests in writing, Spanish, cuisine, and ministry, which she hopes to pursue in some creative capacity come springtime. She is a pun enthusiast who enjoys softball, jazz, photography, and Manchego cheese.
View all posts by Emily Rothbard →
From Afghanistan to the Grove: How a Little Piece of Shrapnel Changed Everything
Initiative and Innovation in the Student Investment Society