While many college students are invested in obtaining their own college degrees, Victoria VanBuskirk (‘14) is dedicated to funding the education of other young women across the globe.

When Victoria and her sister Ashley were both in college, they founded Flora Stationery, a nonprofit organization that provides scholarships for women in Eastern Europe to receive a college education in their own countries. 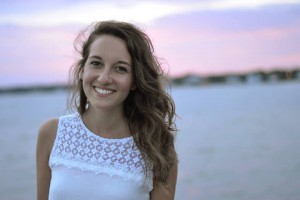 Victoria says that the inspiration for Flora Stationery began when her twin sister studied abroad in Kosovo and met a young woman there named Ema.

“Ema had a really compelling story about how she couldn’t afford education due to means outside of her control and how she was also the sole breadwinner for the five members of her family,” Victoria said. “Unemployment in Kosovo, which we learned after learning more about [Ema’s] story, is currently 45% for students between the ages of 16 and 24—the second highest in the world. After hearing about that and hearing about how Ema couldn’t afford an education in her own country and in her own language, that was something that really compelled Ashley because she went to Kosovo on a full scholarship.”

While her sister developed a passion for educating women after her trip to Kosovo, Victoria also discovered her passion for education through her Communication Research Methods class at Grove City College. “Research Methods is really where I found a passion of mine…I remember the moment of finding a webpage about the disparity of literacy in the world—700 million illiterate men and women in the world and 500 million of those are women. That has made me want to pursue education initiatives to help people read and write and know their rights, which I think is really powerful,” said Victoria.

Driven by a desire to make college education affordable to young women in Kosovo, Victoria and her sister developed the idea for Flora Stationery. “We talked about it and thought of making some sort of sustainable way to support scholarship for women who want to study in their own countries to then benefit their own countries,” Victoria said. After considering what product to sell in their business, Victoria and her sister decided on stationary because it represented the idea of school and education.

An important part of starting the organization occurred when Victoria saw a poster for the VentureLab program in the entrepreneurship department at Grove City College. “We worked through the VentureLab program just to get the idea off the ground…bouncing ideas off of different people through VentureLab was really helpful for the first semester that we were working on it,” she explained. Victoria said that her VentureLab advisor, Dr. Mech, supported the launching of Flora in multiple ways. “I think the most important thing that he encouraged for Flora was prayer, actually. Before he made any decision or talked about Flora whatsoever, we would pray about it. I think that just set a really good tone for all of our decisions that we made and all of our conversations. Here, at Grove City, I was able to get that because, at the end of the day, Dr. Mech’s purpose and my purpose was to glorify God through it.”

For Victoria, the greatest rewards in her nonprofit work come from hearing the stories of students helped by Flora and inspiring other people to become involved in the cause. “Next semester we are funding two mothers and two of their daughters, which is so cool to see a full circle,” she said. 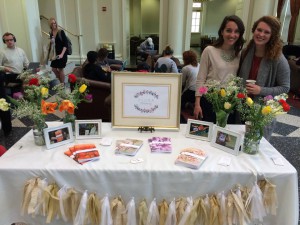 Flora Stationery recently received an offer from Keds to create a special line of footwear and accessories using artwork from the students in Kosovo. The collection will be available in the spring of 2016 and the proceeds from the sales go to Flora Stationery.

“We’re really excited to be working with Keds in the spring,” Victoria said, “and we’re excited to be able to share so many stories with people when that comes out…the opportunity to connect more people with our purpose.”

Victoria says that her time as a student at Grove City College helped her to become the person and entrepreneur that she is today. “Looking back, I think that Grove City enabled me to think really critically and enabled me to build relationships with so many different people who inspired me. I think that when you’re surrounded by people who inspire you to be more, you become more, and so you do more. I’m really thankful for Grove City in the fact that I was able to cultivate those relationships that then pushed me to do more and be more for Christ.”

Learn more about VentureLab and the GCC Entrepreneurship Department here.

Anna Scofield (’16) is a communication studies major at Grove City College. Her interests include organizational communication, branding, and writing. During her time at Grove City, she has discovered her love for developing big picture ideas, visiting coffee shops, and exploring the power of written word.
View all posts by Anna Scofield →
Guten tag, Germany!
A Marketing Major’s Experience in GCC’s Elevator Pitch Competition