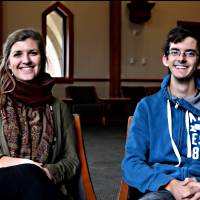 At Grove City College, faith and freedom go together like crimson and white, pancakes and finals week, rings and spring—you name it. They’re integral to our mission, firmly rooted in the pursuit of objective truth. Though we tend to take for granted this fundamental combination, a good glance beyond the Grove will reveal that persecution is real and rampant.

According to Open Doors USA, an average of 322 Christians are murdered every month—just some of the 100 million worldwide currently suffering for their faith. Not only does persecution harm Christians—it also suppresses the truth and keeps it from reaching the lost. Yet what can be done? Perhaps statistics like these don’t mean much for college students caught up in the craziness of figuring out their futures. And even if their hearts do ache, what sort of impact can they make from 7,000 miles away? Perhaps none. But Amy R. (’16) and Zachary P. (’17) would beg to differ.

As missionary kids who have come to recognize the importance of cross-cultural ministry and the power of prayer, Amy and Zachary set out to establish a place of fellowship for missionally minded students on campus, founding the Student Missionary Fellowship earlier this fall. As an organization that’s dedicated to providing opportunities for students to gather together, network with missionaries, and strategically pray for the nations, SMF certainly contributes to the college’s mission to “produce young leaders capable of pushing civilization forward on every frontier.” 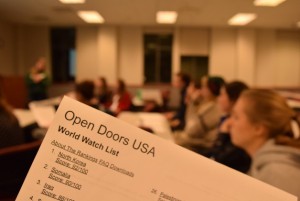 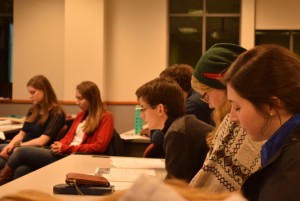 Every Sunday night SMF members get together to discuss and pray over current world issues like the Syrian refugee crisis, ISIS, Boko Haram, the Oregon shooting, and other precarious situations that pose major threats to the church, and humanity as a whole. The group also brings in speakers to share their insight, such as recent guest Suzanne Rumbaugh—Northeast Director of Mobilization for Frontiers Missions. With first-hand experience on the mission field and a heart for sharing the gospel, Mrs. Rumbaugh shed some light on what’s going on in the Muslim world, which comprises 80% of today’s unreached population. After showing videos depicting Saudi Arabia as dangerous yet fertile ground for seeds of truth to be planted, she invited students to gather around a world map to pray over the Middle East and other regions in crisis. 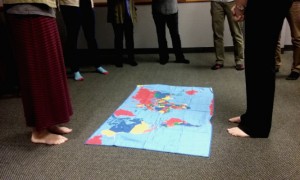 As Christ-followers who have witnessed God working abroad since they were young, Amy and Zachary realize the Great Commission is more than a mere suggestion. “Right before Jesus ascended into Heaven,” says Zachary, “He commanded us to go into all the nations, preaching and baptizing in the name of the Father, the Son, and the Holy Spirit—but if you just think about it, why wouldn’t you want to see Christians in other countries?” His zeal is shared by Amy, who affirms that “It’s the purpose of history that the Lord’s name would be glorified in all the nations.”

Matthew 9:37-38 forms the foundation of the Fellowship’s mission: “The harvest truly is plentiful, but the laborers are few. Therefore pray the Lord of the harvest to send out laborers into His harvest.” In light of this, SMF hopes to recruit more laborers as they seek to build His Kingdom, one prayer at a time.

Amy R., a senior Entrepreneurship major, moved to Honduras at the age of 11 to serve with her family at a mission hospital. After graduation, she hopes to start a business in the sphere of social entrepreneurship that would benefit human-trafficked women in the US or around the world. Thanks to Grove City, she has had countless opportunities to “hone and pursue different ideas, especially within the Entrepreneurship Department” as she seeks to make her mark.

Zachary P. is a junior Biblical & Religious Studies and Business Management double major who grew up in the Czech Republic. Looking ahead, he hopes to pursue seminary and eventually mission work in a developing country. For Zachary, being at Grove City “has definitely deepened my relationship with God and made me a lot more mature, responsible and wiser than I think I would have been if I had gone anywhere else. It has also seriously encouraged me to continue thinking of going abroad, so I’m very thankful for that.”

Emily ('16) is a Communication Studies major with minors in Spanish and Biblical & Religious Studies. Spending a semester abroad in southern Spain helped to season her interests in writing, Spanish, cuisine, and ministry, which she hopes to pursue in some creative capacity come springtime. She is a pun enthusiast who enjoys softball, jazz, photography, and Manchego cheese.
View all posts by Emily Rothbard →
From Where Out West? Student Spotlight on Emily Bartlow
Grovers Abroad: Q&A with Allison Hafner