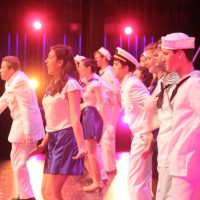 By justicecp1 on November 29, 2016 in Art & Design, Campus Events, Inside Student Life, Theater

Each semester, the Grove City College theater department puts on a major production, as well as a few smaller theater performances with students from all disciplines. This fall’s performance was Cole Porter’s “Anything Goes” – a musical filled with gangsters, sailors, and of course hopeless romantics. Weeks of preparation and hard work by the cast and crew, sound and lighting technicians, and orchestra pit performers, went into creating this amazing show.

“Anything Goes” is a well-loved show about many outspoken characters on a ship from New York to London searching for love, money, and an entertaining time. The main character Hope Harcourt was played by freshman Jordan Luntz. This was Jordan’s first production at Grove City College, and as a mechanical engineering major it was a bit of a handful. “I was worried that coming to college as a mechanical engineering major, I wouldn’t have the opportunity to be as involved as I would like,” Jordan explained, “but Grove City is a truly special place with truly special people that made my production easy and enjoyable.” As an underclassman, she explained how many upperclassmen and directors helped teach and encourage her to make the production an easy and enjoyable experience. “The entire cast was accepting and just a pure joy to share the stage with. They did their best to work with my schedule and make my life as easy as possible,” she said.

Our theater department goes far beyond actors and technicians, and there are many opportunities for students to get involved in ways that are convenient to them. Senior Jonathan Fisher is a communications major with a passion for theater. Jonathan was able to give some insight about what it’s like behind the scenes of larger productions, specifically as a spotlight operator. Jonathan explained how he felt right at home with the cast and crew, even as a spotlight operator. He said, “we had a lot of fun bonding, even if it was just over pre-show meetings.” Jonathan discussed his first experience with theater and how his roles have changed over the years. “When I first came into the theater program, I was so focused on acting but it did not work out as planned, and I did not want to be backstage,” Jonathan said, “But I ended up having to do some tech things for classes I was taking, and I realized when you do tech you are involved. You are the cast and crew.” The flexibility and skills in the technical part of the show was something Jonathan was happy to contribute to and greatly enjoyed.

Being in any large scale production is tons of hard work and a huge commitment, and can definitely be a strenuous process. At the end of each tech rehearsal week, Grove City cast and crew meet and give senior speeches for those who are graduating and want to give last pieces of advice. Jonathan explained, “Something that my friend Sarah Giesler said stuck with me, and that was to choose joy. Especially during tech week, Christ is the reason we can choose joy over the stress so we can  choose to look to him.” It is so important in those moments to come together to pray and encourage one another. It is such a blessing to work with a theater department that takes so much care and consideration to appreciate one another and all the work it takes to putting on an excellent show.

Along with all the hard work, this cast had just as much fun, especially making this video in their time between scenes. Enjoy the students of the theater department!

View all posts by justicecp1 →