Independence is an essential part of growing up and becoming an individual. There is value in having confidence to be able to accomplish something successfully on your own. Being independent is a highly desirable quality to possess. It’s a great key skill to add to your resume. So, it should be no surprise when I say that choosing to be an Independent at college can be a great thing too.

Being an Independent means that you have chosen not to be a part of a Greek or Housing Group on campus. At Grove City College, there is a large Greek presence, with many different groups to pursue. Greek life is always a valid option for those who seek that kind of group identity and friendships. However, one’s decision is not restricted to either rushing a Greek group or becoming an bored outcast. Choosing to be an Independent is just as much of an important decision as choosing Greek, and should be a valid option for those who are unsure of their extracurricular future. 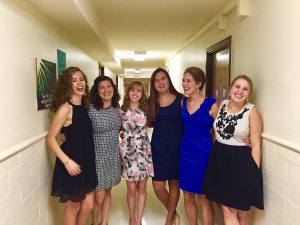 Independent Women have fun too!

Being an Independent among many Greek groups at Grove City College has proven to be an enriching and growing experience for me. As a freshman, I was worried that I would lack something important in my college experience because I didn’t feel like I fit into the Greek life. So I chose to be an Independent, and found that there was a whole different side of a college experience that was just as fulfilling. Some of my friends made the decision to go Greek, while some chose to be Independent. Despite some division between the two choices, my friends had to choose what was best for them and what they wanted out of their college experience. For me, I fit best among independently-minded people. I was lucky enough to have great friends around me who chose the same path, and we set off on the adventure that is Independent living.

I learned that to be an Independent means you have the freedom to make choices and try new things. Just because you don’t wear Greek letters doesn’t mean that you do not have the same opportunities to have fun and experience all that Grove City College has to offer. By choosing Independence, a network of like-minded individuals is created. The environment you choose to be in becomes an empowering and exciting group to be apart of. The possibilities for each individual are endless, and each person brings their own interests and personality to the table.

Junior English major Bethany Wilson commented about her experiences as an Independent. “I enjoy having a variety of different kinds of friends, and the flexibility that being Independent allows. Choosing Independence has been a positive experience because I have formed a lot of close friendships without a sorority to bring us together. It has been great in forming bonds with people in many different directions instead of just in one place.”

Caitlin Washburn, a Junior Biology/Psychology major, also added to why she chose to be an Independent. “I like being able to choose with who and where I live, and I like that I don’t feel like my friends are confined to one group of people. I don’t have to meet a certain image or stereotype, and I like the freedom to be who I am instead of fitting a certain mold.”

The variety of choices and involvement only add to the diversity of people you find on campus. Whether Greek or Independent, your choice is valid and in no way impedes your abilities and experience at college. There is no right or wrong way to choose, as long as it is true to your goals and to yourself.