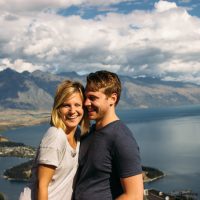 By Abby Cunningham on April 5, 2017 in International Experiences, Travel, Uncategorized

Have a travel bug? Do you scroll through social media drooling over pictures from other people’s travel adventures? Do you have a bucket list of places you’d like to go and see someday? We’ve got you covered.

Grove City College is a great place to jump start a lifetime of travel and adventure. Whether you are interested in studying abroad, interning for an international business, or doing missions there are many ways to see the world during your time in college.

Shane and Julie Murphy graduated from Grove City College in 2010 and 2012, respectively. After graduating from Grove City they got married and began their jobs in Washington, DC. A year into their marriage, they quit their jobs, packed their bags and headed off on an adventure of a lifetime. Grove City helped foster a love for travel in both of them. I interviewed Julie to hear about their trip, how they prepared for it, and the role that Grove City played. 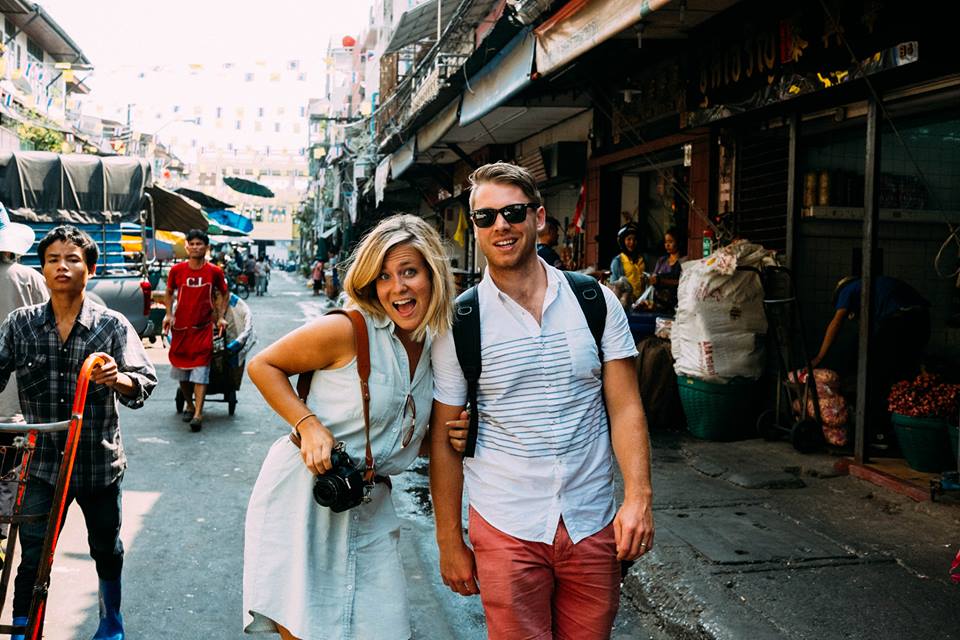 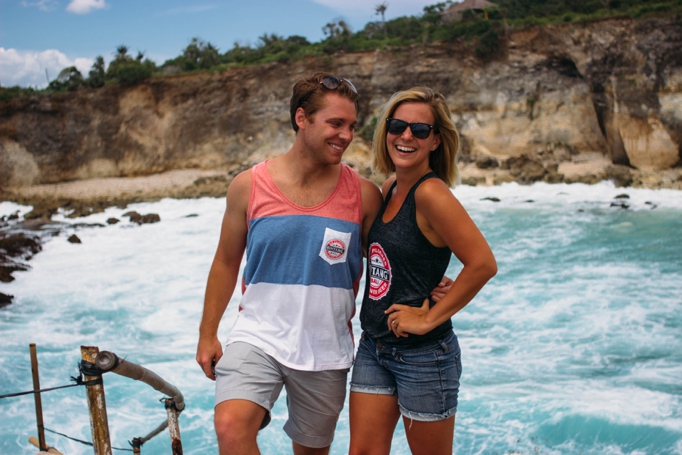 How did you and Shane meet?

Shane was a senior and I was a freshman. We met the first week of the year at a study abroad fair. There was pizza so I went for the food. Shane worked for the study abroad office and was at the event helping out. We got talking about travel and my interest in studying abroad. Pizza, travel, and a cute guy. The rest is history. We got married in December of 2012. 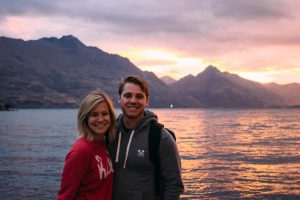 Shane has always gotten excited about the idea of meeting people from different cultures. But the first trip that got him interested in traveling was a surf trip that he took through Central America during high school. Following that trip, he worked each summer to save up money to travel more in the future.

As for me, I got to travel with my family growing up. My parents instilled that love in me. In high school I had the opportunity to tour Europe with my high school music program. After that trip, I knew I wanted to study abroad in Italy some day in college.

When Shane graduated he worked for Charles Schwab in Ohio and then he moved to DC and worked for Fidelity. For him, this time was about building his career in finance.

For me, we got married and I moved to DC. I had a temp job for a few months. Through a friend, I was able to land a job with Wedding Wire. It was my first job and I really loved it. It was fun working with young people and it had great benefits. Shane and I both loved the city feel and living on Capital Hill.

When did you decide that you wanted to take a trip?

We had always had it in the back of our minds that we wanted to travel long term or move abroad in some way. It was always something we talked about as we met at a study abroad got engaged abroad, honeymooned abroad, and had both traveled a lot. A big trip was something we decided we would budget for and save up for. Since we’ve been married we’ve always put money aside for travel out of every paycheck. 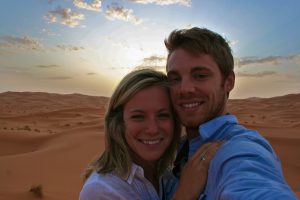 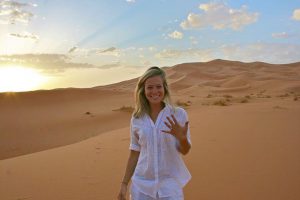 When there came a promising job opportunity for Shane at another company in PA, we decided it was an ideal time for us to travel. We wanted to travel before we moved and Shane got settled into his new job. We quit our jobs in December 2014, began our trip in January 2015, and returned stateside in May of 2015.

How did you go about planning the destination?

We had always wanted to go to Southeast Asia. We felt that we might as well go as far away as possible. We knew it would be harder to make a quick trip (a week long) to this area of the world. Places in Europe were easier and more convenient to travel to. We wanted to take this opportunity to go farther away.

We planned our trip along the way. We bought one way tickets to Australia and planned the rest of our trip from there. We had places we definitely wanted to go such as New Zealand, Thailand, Vietnam, and Bali. These were all on our bucket list but once we arrived in Australia we had no firm agenda. We just rented motorcycles and cars and went from there. 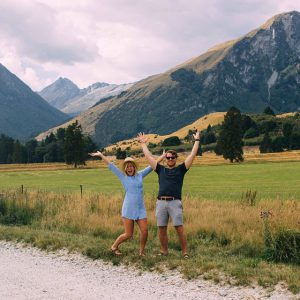 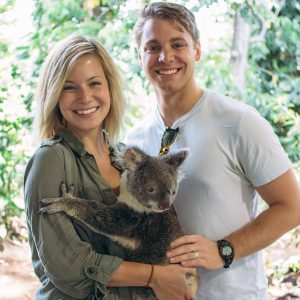 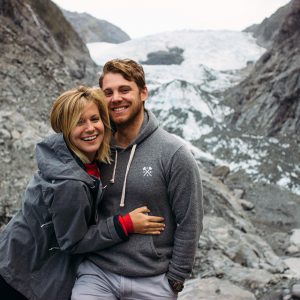 How did you prepare financially?

Like I said, we had kind of always planned to do something like this. We started budgeting for a long-term trip early on. It was probably a total of one or one and a half years of saving, but then six months of more intense saving leading up to our trip. In those six months we cut a lot of unnecessary expense out of our lives. We stopped eating out, using cable and paying for other unnecessary things. In addition we only had one car between the two of us.

We actually didn’t pay for any flights because we took advantage of credit card points. This is key. 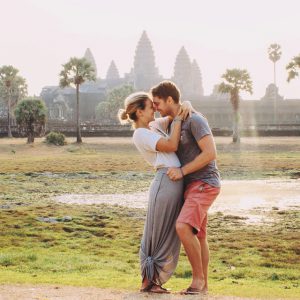 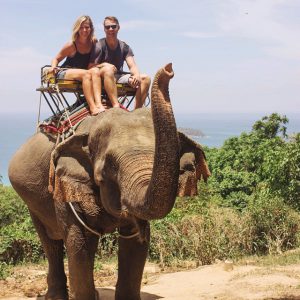 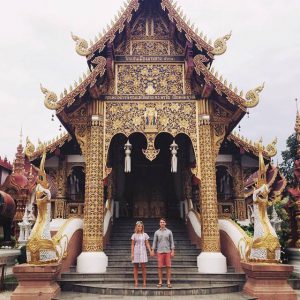 We also set a budget for ourselves before we started our trip. With the exception of Australia and New Zealand, we could stretch the dollar really far in every country we traveled to. We knew that Australia and New Zealand would be more expensive and spent about 60% of our budget during the first month of our trip because of these locations. In contrast, places in Southeast Asia were inexpensive. For example, in Vietnam we spent roughly $10 a night on lodging and a meal would cost about $4 for the both of us.

In addition, a majority of our stays were at Airbnb’s. It’s easy to find lodging through Airbnb in practically any country for affordable prices.

What was the best place you went?

What was the best experience of your trip?

A few of our favorite experiences were bungee jumping in New Zealand, a motorcycle food tour in Vietnam, and a hot air balloon ride in Turkey. 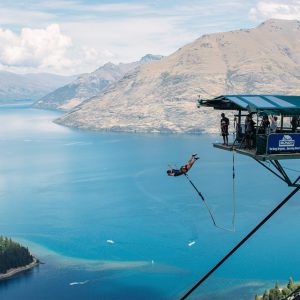 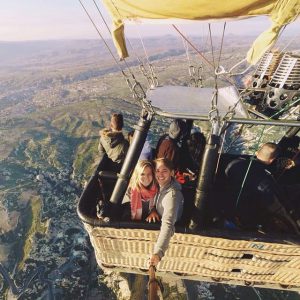 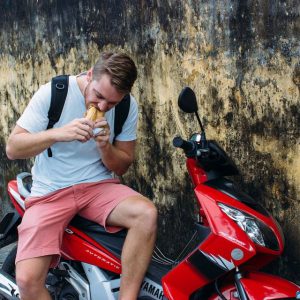 We had some guide books for activities, but a lot of things we found through travel blogs and meeting people along the way and asking for recommendations.

Do you have any travel plans for the future? Where’s your next destination?

The next trip we have planned is to southern France. We are traveling there to help with a photography workshop that one of our good friends is putting on.

We would like to work on continually building in time for longer trips, but because of our jobs we probably won’t make quite as big a trip in the near future.

We’re hoping to work towards going to South Africa. Shane is constantly playing games with credit cards to find ways of racking up reward points to use on airfare.

How can students start preparing now for a life of travel?

Talk with the people in the study abroad office and those that have studied abroad or gone on ICO trips. There are opportunities to work abroad as well that professors can help you with. Shane lived in Tanzania for a summer by just sending out dozens of emails to companies in other countries.

Be creative and do research. Talk to professors and other students about what you wanna do and how you can get there. I knew I wanted to study abroad but I did it in the summer so that I would get credit but didn’t miss a semester on campus. Research different options and what would be best for you.

We went to Austria a few months ago which was awesome. 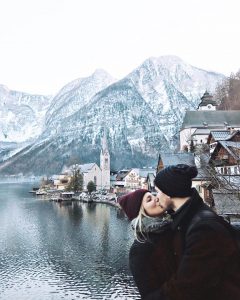 We also took a trip to Iceland a couple of years ago. We are pretty obsessed with it and think everyone should go. Its accessible, and affordable. 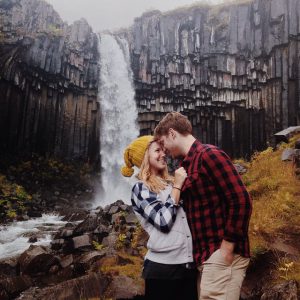