By Robbie Davis on May 10, 2017 in Campus Events, Ministry, Spiritual, Student Stories 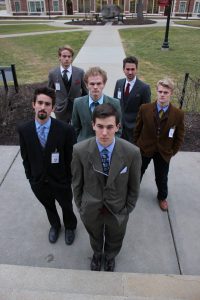 Every year, a group of seven gentlemen dress-up in three-piece suits and don’t shower. These men also have a formally-written constitution, arrange a photo shoot, and advocate for missions work in Africa. While this may seem like a strange list of attributes, they all describe the gentlemen that call themselves the Suitists.

Every year, this group wears their suits (without taking them off) to raise money for Project Okello and the ministries that Okello is supporting at that time. Throughout the week, the Suitists hold Bible studies and often grab meals together, to promote the unsanitized solidarity that keeps their Suits on and smiles beaming.

The hope of the challenge is that by foregoing bathing and a daily change of clothes, as well as donning a classy outfit (albeit for an entire week), that their efforts will garner questions about why they’re doing what they’re doing. This in turn receives an explanation of the cause being supported and the mentality behind wearing Suits for an entire week. Ideally, the explanation results in the donation of a few dollars from the inquisitive individual.

Not living in an ideal world, this is not always the case. In all honesty, that can sometimes be discouraging, especially when you’ve slept and lived in the same suit for the last three days, share about the importance of what you’re doing, and then get flat out rejected. It’s a disheartening experience.

But by the middle of the week, a few of us recognized this, and decided to discuss how we were feeling and why that was. What we came to realize was that it was not because of our failure but because of our focus on ourselves. It was not about the Suits or the Suitists, but rather what God was doing through us. 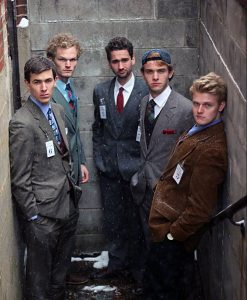 After we had this revelation, it was far easier to move forward with our week. It was by no means easy, as not showering does come with many downsides, but it was still far more fulfilling and tolerable. We quickly came to realize that it was by no means the thing we were doing that was the most important aspect, even though it was important. It was far more important to remember the God who we were serving by serving others.

And so the Suitist Challenge will continue. What started as a mess was made to be beautiful through God’s faithfulness. Be it a gentlemen’s fundraiser or a local ministry, Grove City College students are committed to serving the least of these, foregoing their own comfort for the benefit of those around them.

Robert is a Senior Communication Studies student with minors in English and Theatre. When he is not on the stage in a production, he is most likely either nose-deep in a book, (averagely) playing guitar, singing his heart out in the shower, or sitting around, deep in conversation with friends.
View all posts by Robbie Davis →
Tau Alpha Pi: Theatre Honorary Revitalization
The Happy College Student: Tips for being Healthy & Balanced