By Robbie Davis on May 9, 2017 in Student Stories, Theater 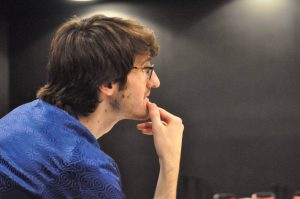 The fall of my sophomore year at Grove City I was inducted into Tau Alpha Pi, or TAP, the theatre honorary on campus. In order to qualify for the honorary, you need to participate in two areas of theatre production, be it acting, directing, crew work, or management, and show a dedication to the department and its goals.

It was an honor to be selected as an applicant, and I’ve thoroughly enjoyed my time in the department. In the spring of that same year I was elected the positions of Treasurer and Co-Social Chair. It was great to be able to take part in the inner workings of the department, and I was honored to be elected.

By the end of my sophomore year, however, many of the heavily involved members of the group had graduated, and we were left with an executive team which had not been involved with the organization for long. This was not necessarily a bad thing, but it left gaps in our knowledge base which put us at a disadvantage.

The beauty of the Grove City theatre department, and the campus in general, is that its students are passionate and driven, and this leads to a strong desire to not just pursue but advance the activities that they have found so much joy in doing. Sometimes, that takes a little time, but the dedication, when unwavering, pushes you through to the other end. 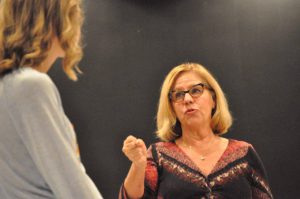 This was the case with TAP. For a year, my junior year, we struggled to find the best way to move forward. We knew that with our lack of information in certain areas, we’d need to find new, innovative ways to advance the individuals in the organization as well as the reach across campus. Ideas were thrown around suggesting cabaret nights and large fundraisers, nights of short scenes and flash mobs…

But something just was not clicking. Be it the grand nature of the suggestions and the dwindling number of members or perhaps that daunting questions of “Can we really do this?” hanging over our heads, we didn’t know how to move forward. Those are the best moments, though. The ones when you’re just not sure how to move forward. The ones where moving forward, or even to the left or right, is necessary to prevent from falling back.

Funds were our biggest issue. As an organization, the only way we received funding was from new member dues, and then we would spend about that for our annual theatre celebration. This was great, but with more funding we knew we could do a lot more to benefit if not the campus, then at least the department.

It was at this moment that we realized what was right under our noses: the talent of the cast. We were surrounded by so many wonderful individuals, particularly musicians, so why not showcase that. Before each show our Fall musical, Anything Goes!, we put together a bit called Tips4TAP. As the audience gathered into the lobby, we would send out a group of students to perform a musical number for those waiting to get in. Along with this we put a tip box out for the audience to make donations if they so desired. This was a tremendous hit! 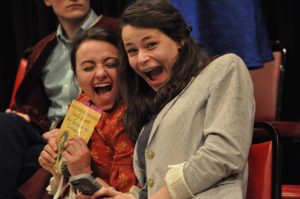 Then we were faced with a question we hadn’t quite anticipated: what next? Now that we had more money, what should we do with it? The answer we came up with proves not only the goodwill of the students but also the desire to see individuals flourish in theatre.

Every year, students are sent to a national theatre festival to perform and compete against other actors. Through department funding, we are able to help these individuals get there. The festival, though, offers workshops and exercises spanning all areas of theatre. We decided to put together a fund to send a non-actor to the festival each year and let them take advantage of all the resources it had to offer.

Just like that (and by “just like that” I mean after a year of a lot of thinking) we knew how we could benefit those around us through the honorary. I am very proud to call myself a member of Tau Alpha Pi.

Robert is a Senior Communication Studies student with minors in English and Theatre. When he is not on the stage in a production, he is most likely either nose-deep in a book, (averagely) playing guitar, singing his heart out in the shower, or sitting around, deep in conversation with friends.
View all posts by Robbie Davis →
Student Spotlight: Mechanical Engineering and Girl Power
The Suitist Challenge: Going Without for Those Without