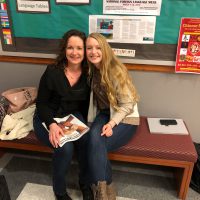 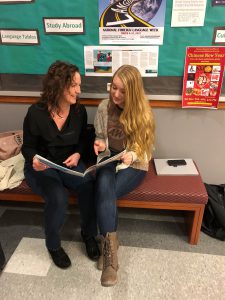 “Our thoughts make to be our actions. You are so worthy. Think positive and step outside your comfort zone everyday to grow to our true potential,” said Trisha Pritchard to her public speaking class. Starting just last fall at Grove City College, Pritchard has already had 10 years of teaching under her belt at Butler Community College, along with time at Duquesne University. She had finished a class one day when she received a Facebook message from Dr. Kimberly Miller, asking if she would be interested in teaching a few classes in need of an instructor. Pritchard described how important this situation was in terms of connections and the good of social media. “My friendship with Kim really started back when our daughters were in dance together. So to stay connected through social media was useful not only to help maintain that friendship but also for connections such as with my position now,” Pritchard said. She further discussed how the Department of Communications and Visual Arts can rely on these social medias to bring about networking among people who would not previously link together.

Pritchard teaches public speaking and writing for the media classes here at Grove City College, two of her strong suits and passions. She stresses the importance of conversational skills in everyday situations, whether it be speaking to a group of people or even just a casual conversation. With many years of her involvement in teaching and emphasizing communication techniques, Pritchard is able to work hard in her new classes. In the past year she has found original ways to improve the classes and make them as relatable to the students as possible. For instance, she did several impromptu exercises where the students were presented an idea and delivered a pitch to the class. The students’ final grade was an elevator pitch in which they spoke in front of a room full of Pritchard’s professional colleagues. Classmates learned about open networking, casually talking, and learning about the importance of conversational skills. Pritchard had her professional colleagues give elevator pitches as well, which placed further emphasis on communication is in the real world. From a professional photographer to a journalist to an entrepreneur, students could see how whatever the career, the ability to work alongside others and transmit information is most essential. “Public speaking is important no matter the major. Working outside of Grove City College helps me to know and understand these conversational skills to then relay it to my students,” Pritchard said.

Upcoming plans for her classes include her writing for the media students working with the Butler Eagle to compile articles on small businesses for the June issue. As an active member of the Butler community, Pritchard is always connecting people in order to better society as a whole. Since starting her position as a Communication Consultant at the Butler Family Bowlaway, she’s raised revenue by 300% and has hosted a multitude of events for people of all abilities. Her most recent event was organizing bowling for blind people, something so powerful to watch as they knocked down pins. The 11 organizations, many specialties, and several awards showcase the Pritchard’s passions. Her heart for people and helping them in whatever way she can is a quality that makes her so unforgettable.

With her extremely positive and bubbly personality, students have dubbed her with the nickname of “Professor Poppins.” Pritchard plans to continue bringing happiness, fun, and relatability into her classes in hope that her students will carry it regardless of their path in life. “You can take a class just to get it over with or you can use the time you have to take it to the next level and grow. I am never satisfied and always want the best for my students. If that means completely changing my syllabus overnight because that’s a calling I hear from God, I will definitely do it,” Pritchard smiled.