By Lindsey Lueken on March 23, 2018 in Inside Student Life, Music, Student Spotlights, Videos

If you are ever looking for something to do on campus and you are musically talented, the stairwell in the Physical Learning Center is a place with great acoustics on campus. Ever since I was a freshman, I have always enjoyed listening to my friends play guitar or sing in the stairwell, whether it was just for fun, or if it was an event they put on. Often times during the week leading up to finals, there will be an hour-long concert held in the stairwell famously named the “Stairwell Sessions,” and students can perform during that time. More recently this semester, Jackson Clemmer and Julia Knepper put together a concert in the stairwell. The concert had a great turnout, as the stairwell was completely full, due to the Facebook Group they created to get the word out.

After speaking with Jackson and Julia, they both had a great time performing for others on campus. Julia said, “I loved the idea of collaborating with another songwriter and musician and creating a more intimate environment for people to come hear some good music.” Both of the musicians played their own original pieces, and it was a great way for others to hear their songs. Jackson stated, “My hope for the show was to create an environment where I could put my original music in front of people who were ready and excited to listen. Most of the songs I had never played for more than a couple people, so it was really exciting to get feedback from a larger audience.”

See the above video for a short clip of Julia’s song “Talk.” Jackson and Julia will be performing another concert on March 24th at Collage Coffee and Art House located on Broad Street in downtown Grove City. 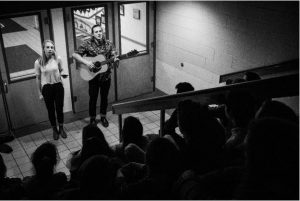 Lindsey is a senior Accounting and Finance major from Slippery Rock, Pennsylvania. As a Grove City local, she is involved on and off campus in the Gamma Sigma Phi Sorority, Accounting Society, Women's Club Lacrosse, and is a member of St. Peter Parish. Outside of her activities, she enjoys spending time with her friends and enjoying the outdoors!
View all posts by Lindsey Lueken →
Reel Life at Grove City College: A Chat with Mark, Founder of Té Amo
“Professor Poppins”