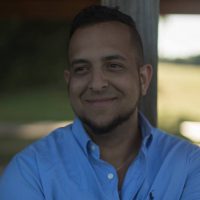 By longrm1 on May 15, 2018 in College Advice, Student Stories, Uncategorized

“I realized in life there are a lot of chapters that we go through. For me the chapters went as such: high school, the military, after that working hard to save money to move here, and now college. For me this chapter is closing, I’m already preparing to ‘write’ the next chapter. Each chapter seems longer than the other one, not by amount of years, but things that happen, things that matter, things that make me who I am.”

Daniel Peiffer is a senior Communication Studies major with a minor in Design. Over the past four years he has been involved in WSAJ, Grove City College’s radio station, and has pursued his passion for photography in his free time. While he seems like an average student, Daniel does not consider himself to be like the typical “Grover.” Daniel grew up in Israel, he does not share the same Christian faith as many students, and he did not intend on coming to Grove City College. Although these things made his transition to college more challenging, Daniel used this experience to grow as an individual.

While at the College, Daniel learned that being organized is the key to success. He noted that being unorganized and slacking will “show up in your grades” and that working hard leads to extra time to explore hobbies and to relax. He also discovered that each class, for better or worse, was a learning experience that helped him to determine his strengths and weaknesses and how to better manage them. He even spoke highly of the independent study that he took, commenting that the class helped him to “discover and learn a lot more about I want to do in the future.”

As this chapter of life closes for Daniel, a new one full of even more adventures will begin. Daniel longs to put his education to the test to pursue a career in video production and he hopes that future Grove City College students find their niche as well.