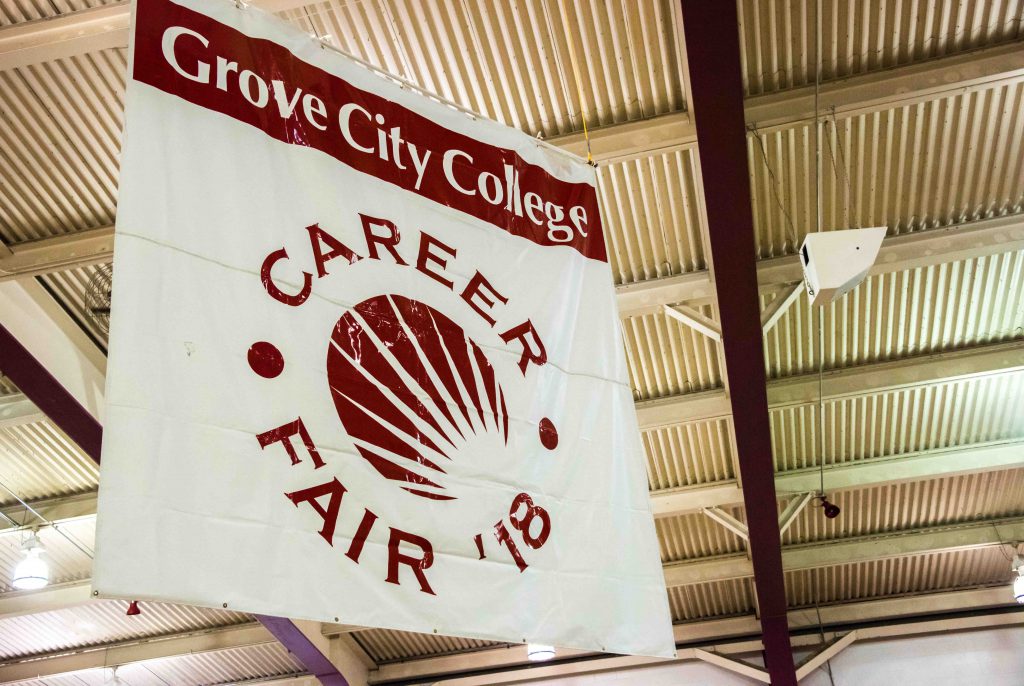 After the Grove City College Career Fair on Sept. 26, the Business Department offered a career networking mixer and panel discussion. This event offered an insider’s perspective into the business world and insight on how to gain a competitive advantage in interviews. Students had an opportunity to mingle with business professionals over hors d’oeuvres before hearing from speakers at the panel session.

David Durfee ’13, returned to the Career Fair as a sales executive with Armstrong World Industries. His degree in Marketing prepared him for this career, but he said that the services offered to current students has improved since his college years. Durfee explained that the annual career fair – a school-wide event – attracts more marketing and management firms now, which provides more networking opportunities to business students. In addition, he has seen improved professor interaction during the fair; students can now find guidance from their professors on which firms to approach, how to start a career conversation, and how to increase self-marketability.

Grossman Yanak & Ford (GY&F), a Pittsburgh accounting firm, regularly sends representatives to recruit Grove City College students. Colleen Febbraro, HR Director at GY&F, says that the Certified Public Accountant (CPA) firm seeks Grovers because they have found that Grove City graduates are well-rounded compared to their peers. In addition, the graduates have been prepared by their education to work well on their own and in groups. She mentioned that GY&F has found Grovers to have “superb” communication skills and advanced technical training – attributes that are evidence of thorough preparation by trained faculty. Though GY&F has a familiarity with the quality of a Grove City College education, Febbraro said that Grove City’s exceptional Accounting program – which graduates students with a CPA passing rate at nearly 30% higher than the national average – is making a name for itself as ninth in the nation for CPA success rates.

Emily Miller, who graduated from Grove City College in 2015, now works with Grossman Yanak & Ford and returned to the Career Fair to help with recruitment. She says that Grove City College left her prepared to excel in the CPA exam and her future career. Though she was not expecting the volume of writing that her job demands, she says that the Grove City humanities core adequately prepared her to handle this challenge.

The business mixer representatives offer not only career placements, but also higher education opportunities. Alexander Lowry represented Gordon College as the executive director of its Financial Analytics program, explaining that this program would be ideal for Grove City students studying a variety of disciplines. For students interested in a career involving finance, statistics, or data analysis, the Boston school offers a Master of Science in Financial Analysis. Entering a fast-paced career after college can be intimidating to undergraduate students, but Gordon College offers insight into the Boston financial scene. Lowry, who has experience in executive management at JP Morgan, explains that students can expect networking and internship opportunities during the 12-class program – Gordon has long-standing ties with financial powerhouses like Liberty Mutual, Fidelity Investments, and Putnam Investments.

The question and answer panel, which featured several Grover alumni, consisted of several businessmen giving advice and feedback to the students about launching a career. After the event, there was a tangible atmosphere of excitement and anticipation about preparing for the future, with many students discussing what they liked about the panel. One student noted that it was encouraging to see Grove City College alumni in such high positions at their firms – evidence that a Grove City degree is highly marketable. Another observation was an appreciation that the speakers went very in-depth in giving advice on how to prepare for a full-time interview. Interviewing for a part-time job in high school, the student said, is very different from the process for a “real” career, and so he enjoyed the tips for interview preparation. Overall, the Business Mixer was a huge success, providing not only opportunities for students to network with prospective employers and fellow members of the Business department, but also opportunities for students to hear relevant advice for career preparation during the panel.