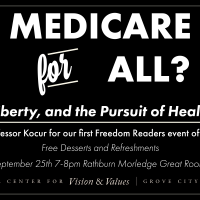 By Garrett O'Toole on November 24, 2018 in Economics, Interesting Speakers

Tuesday, Sept. 25 marked the first “Freedom Readers” event of the year sponsored by The Center for Vision and Values, Grove City College’s own conservative think tank. This month, Professor Richard Kocur (business department) spoke on the healthcare industry, specifically tackling the “Medicare for All” movement popularized most notably by Bernie Sanders.

Professor Kocur is not only personally interested in this subject matter, but he also focuses much of his independent research on this topic. Kocur started his lecture by reviewing the history of healthcare in the United States, then broke down the popular movement seen today and spoke on the implications of such a system in the United States. Kocur discussed how this would not work here due to myriad factors, and explained how those implications would affect the three major players in these scenarios: payers, providers, and patients. While some countries do have single payer systems, Kocur noted that the tax rates are significantly higher there to compensate for the costs, and as a result, certain parts of these nations’ economies and even their own healthcare systems suffer from such a large influx of participants that take part in the system.

Finally, Kocur went on to talk about market-based ideas that the United States could possibly explore to remedy the situation, citing direct patient contracts, health savings account expansion, and the ability to purchase healthcare across state lines as potential viable options.

The Center for Vision and Values is an organization on Grove City College’s campus that employs student fellows in the fields of research and marketing to help promote their events and to aid in producing scholarly content for the organization and their partners. If you would like to learn more about the Center, head over to http://www.visionandvalues.org/, or check out the student-run news site “Checkpoint” at https://www.checkpointnews.org/.

Garrett is a senior at Grove City College majoring in Communication Studies and minoring in Entrepreneurship and Design.
View all posts by Garrett O'Toole →
Inside Grove City College: A Transfer Student’s Perspective
Finding a Church Home Away from Home Part 1