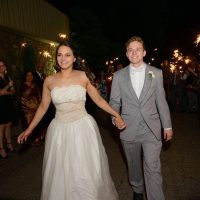 Priya Sprunk was a Psychology major with a concentration in Exercise Science during her time at Grove City College. As a member of the 2017 graduating class, Priya still feels very connected with the students. She was a member of the Sigma Theta Chi sorority, and still holds close relationships with the current girls, along with alumni. About a month after graduation, Priya was married to her best friend, Nate Sprunk, who changed her formerly the last name of Graczyk. Since Nate is a current senior at The Grove, Priya was able to shed some light on their relationship while in different stages of their lives.

When asked what it is like with Nate still in school, Priya responded with:

“It is different for sure. It is a somewhat challenging dynamic when one person in a relationship works full time and one is a student full time. I sometimes wish I didn’t have to live in my college town because it makes me feel like I haven’t fully moved on from college. However, my job helps me feel like I’m making a difference, which helps. I work as an instructor for adults with mild to moderate intellectual disabilities who have graduated from high school, but still, need to develop independent living and employment skills before living on their own. I really enjoy it!”

Priya stressed how it has been hard to make time for other friends after working full time and then coming home to spend time with Nate.  However, she feels that marriage has helped both become more independent and hard-working, along with giving them the happiness of living together.

“We met about 10 years ago when I was in 7th grade and Nate was in 6th grade. We were part of the same youth group and were always close friends. I had a huge crush on him, but we didn’t start dating until the summer of 2014 before my freshman year at Grove City College. The college time together helped us grow together; I don’t even recognize the young and immature teenage couple we were four years ago. Living in a Christian environment helped me grow spiritually and make Christian friends who hold me accountable while encouraging me. Later we began to think about marriage as we started thinking about our future careers and what we wanted for our lives.  By the fall of my junior year after many discussions by ourselves, with both sets of parents, and with friends, we had decided we were ready to commit our lives to each other. We were engaged the following March,” Priya said.

Priya and Nate continue to enjoy each other’s company, build upon their relationship, and focus on God. By attending church, reading their Bibles, and praying together, their commitment to growing spiritually has shown in their actions toward others and each other. They lift one another up while practicing patience and empathy in the hard moments. Priya looks forward to their awesome future.