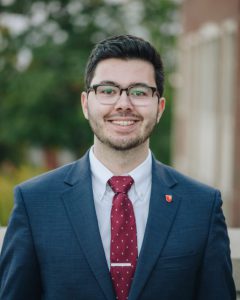 This year, Grove City College had several students take the CliftonStrengths assessment for free as part of a grant the college was awarded in order to foster a deeper exploration of calling and vocation for the students. The program development grant is from the Council of Independent Colleges, specifically their Network for Vocation in Undergraduate Education. This assessment endeavors to provide students with a common language of talents and strengths and attempts to promote a culture where students thrive both inside the classroom here at Grove City College, and in the outside world. One of those students that took the CliftonStrengths Assessment is senior Garrett O’Toole who is pursuing a Communications Studies major.

I asked Garrett how the CliftonStrengths assessment has shaped his understanding of calling and vocation, and he said, “It has really helped me learn about how I’m wired, and where my natural gifts are found. It’s essentially a more in-depth Myers-Briggs test, which allows participants to understand themselves more, which helps greatly in terms of determining one’s calling and vocation. Its results are a great resource to learn the language behind these strengths and apply them to potential job or internship positions.” I also talked to Garrett about how learning his results has helped him in his academics and he said his results have helped him to more clearly define his study habits, and to put a theory behind why he does things in terms of schoolwork. He said, “I mainly understand why I study the way I do, which is helpful to me because it’s something I can point to while I’m studying and questioning why I am doing it.”

I also asked Garrett how learning his results have helped him in different leadership positions. He said this is one of the areas where knowing his results helped him the most. He said, “From the insights that StrengthsFinder gave me based on my results, I’ve actually applied some of the things the assessment said to my leadership style. It clicked with me that I lead others the way I do based on my strength results and putting some language behind it has slightly changed the way I lead to more effectively accomplish things and to empower others while using their strengths.” I also talked to Garrett about how his results have impacted relationships with others both on and off campus, and he said that one of his strengths is communication, so he can also put theory behind why the way he communicates has helped him to gain a better understanding on how to navigate through certain social situations. He also said, “It has also helped me to communicate in a more uplifting way now that I’m more aware of it, not that I didn’t before, but just being more cognizant of my own habits has been beneficial.”

Garrett works in the Advancement Office on campus, so he said having his strengths results has helped him to focus his work on things that pair well with his results. He said, “As a result, knowing where my skills are, I take on assignments that I know I can do really well, along with producing high-quality work that the office can use for their constituents.” Garrett said this has been a beneficial way he has utilized his results outside of the classroom. I asked Garrett if he has noticed any significant changes in his life since learning his results from the assessment. He said, “In terms of ‘significant changes’, I wouldn’t say so, but I can definitely attest to a significant awareness that was raised based on my results.” Garrett said the best takeaway he gained from this assessment was how the StrengthsFinder uses a theory that focuses more on your strengths, rather thank your weaknesses. He said, “This in turn allows participants to focus on things like vocational calling, which is definitely different when compared to more general tests like an MBTI exam.”

Garrett plans to do anything in terms of business, marketing or higher education when he leaves Grove City College, and here on campus he is involved with the Student Government Association (SGA), a member of the Adelphoi En Christo (AEX) Housing Group, a Residents Assistant (RA), and he is a Center for Vision and Values Student Fellow.