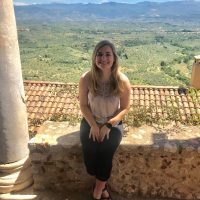 How did you balance taking a class while studying abroad?

Before traveling to Europe, all the students met with our professor for the Christianity and Civilization course, and we had assignments to complete before leaving. We read numerous books and wrote responses. When we flew to Greece, we took our midterm on the airplane. This aspect was a little hard because I was tired, but I managed to get it done. While we were in Europe, we had to complete journal responses at our leisure. Finally, we all had to give a presentation at a designated tourist spot. It may seem like a lot, but I would do it all again in a heartbeat.

At which location did you present?

I did my presentation at Mycenae where I had the opportunity to talk about King Agamemnon and his tomb. It was really interesting because the view was incredible while climbing the mountain, but the tomb is in a honeycomb structure. So, when you go inside, there were cement blocks laid out to look like a honeycomb from a beehive. The acoustics were great and we all sang as one.

If a prospective student was interested in studying abroad for two weeks, what would you tell them?

I would highly recommend this to anyone who wants to travel and also get coursework done too! It is great if you want to complete one of your humanities courses. The one thing I did not realize until we got there was the people you travel with will become some of your closest friends and I still hang out with them on campus now.

How did you find out about the Summer Study Abroad opportunity?

I saw a poster around campus, so I went on my.gcc.edu and went under the International Education tab to learn more about travel courses Grove City College offers.

Europe is known for its food, so what was your favorite item you ate while in Greece and Italy?

Oddly enough, I do not like vegetables, but one of my favorite things to eat was the Greek salad. The vegetables were so fresh, and they serve it with a huge block of cheese and olive oil, it was phenomenal. I still have dreams about the first salad I ate there, that is how good it was. On the other hand, my favorite dessert became baklava on this trip.

Abbey Collins is a senior at Grove City College pursuing a Bachelor of Science Degree in Marketing. Outside of the classroom, Abbey is a member of the Women's Track and Field Team and a number of clubs on campus. She enjoys spending time with friends, baking, and exploring nature.
View all posts by Abbey Collins →
I Recorded a Music Video in Haiti
Video: From Roommates to Brothers – Part 2