By wishingjc1 on October 16, 2021 in Uncategorized 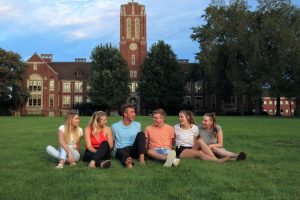 It was never my dream to go to Grove City College. Considering the fact that I was born and raised in the small Western Pennsylvania town, I was ready to experience something new.

Growing up, I imagined going to college would look like it does on TV — moving cross-country away from everything familiar and starting a brand new life. That is not how it looked for me, though. On my freshman move-in day in 2018, I got out of bed, loaded up the car, and arrived to campus in less than five minutes. Saying goodbye to my parents was not too emotional considering this was their fourth and final time sending a kid to college. Also, I was within walking distance from home and knew I could see them any time. Quickly after they left, though, something happened that I wasn’t expecting — I felt like I was not in my hometown anymore. I had entered “The Bubble.”

Students and faculty often refer to the Grove as “The Bubble,” painting the image that, when you are on campus, you are living in your own little world. This is certainly the case.

Grove City College has its own tightly knit community. With a student body of about 2,300 young adults, it does not take long for campus to shift from feeling like unfamiliar, uncharted territory to a mini-world where everyone recognizes each other. People that were once strangers on move-in day quickly become classmates, neighbors, teammates, group project partners, SGA representatives, and more. By the end of the first year, you recognize most faces on any stroll through campus.

One of the reasons this camaraderie forms so quickly is due to Grove City’s small class sizes. While many colleges hold class in crammed lecture halls, a large class here would be one with 30 people. This intimate learning environment opens the door to in-depth class discussion where you build bonds with classmates and professors.

Another reason for this is that many people on Grove City’s campus share similar values. Because the college is so forward about their conservative Christian values, the school attracts many like-minded individuals. This creates an environment in which students can openly grow deeper in their beliefs and shape their worldview with other students. In the humanities courses that are required for all students, professors present challenging debates and ideas observed throughout history, helping students learn how to navigate them for themselves so they can grow deeper in their own beliefs and opinions that will shape them for re-entry into the “real world.”

This re-entry can be jarring at first. While Grove City’s campus community is inviting and enriching, it is still a bubble. Jumping back into everyday life outside school can feel like a bit of culture shock. This, however, gives students and recent graduates the opportunity to truly test the values they solidified in the classroom. Maintaining strong work ethic and holding oneself to a higher moral standard make Grovers stand out in a culture where it is becoming increasingly more common to have an apathetic attitude towards work and let go of traditional values.

Standing out in this way, though, is not a negative thing. Grovers catch the eye of employers quickly and often find fast roads to success, with an average placement rate of 96% within six months of graduation.

While I was pretty indifferent about going to Grove City before I got here, I am so thankful for the experiences I’ve had and the friends I’ve made while being here. Graduation is just around the corner, and even though I’ll have to prepare for yet another major life change, I can rest easy knowing that The Bubble laid a strong foundation for me to launch forward.

View all posts by wishingjc1 →
What College Means to Me: The Series – Bailey Mantzell
Grover Greek Life