Since 1988, the Grove City women’s cross country team has made it their annual tradition to capture the President’s Athletic Conference (PAC) championship title. Their 2015 win was no exception to the streak. This year, the team, lead by three time PAC champion Emily Rabenold (’16), earned a stellar score of 20 points, with five runners placing in the top seven. 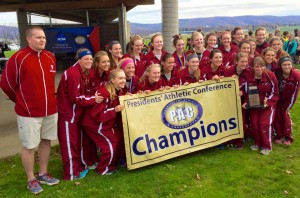 What’s the secret to their success? 12-year coach Sean Severson will tell you that it’s the result of hard work and straight priorities; namely, that Christ and teammates come before oneself. Both in life and in running, there is a great emphasis on living for God’s glory. Before each race, the women pray as a team and then agree to pray for the woman on their right during the competition. For captain Stevie Huston (’16), running cross country from this perspective has been huge. “Not only did it teach me what it meant to train like an athlete, it also taught me how to train for something bigger than myself.”

The team has several mantras that reflect this ethic, including “unbreakable” and “focus on what you can control.” To Huston, the former means “not giving up in the face of adversity and being strong for one another, not yourself. But most importantly, I think it means to center our thoughts and mind on Jesus who is truly unbreakable and finding our strength in Him.”

To Maty Zeckzer (’19), focusing on what you can control was an idea that helped her to improve physically and mentally. “I liked this idea because in my past experiences, cross country was very focused on beating the other runners in the race,” she reflected. “You’ll never be able to control the weather, the course, or other runner’s performances, but too often as runners that’s what we like to focus on and worry about. But with this idea, it takes the focus off of others (who you can’t control) and allows you to concentrate on giving your best effort in that specific moment.” 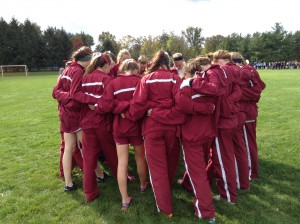 With their priorities straight, the women work very hard at improving their speed and form through lifting, core work, controlled breathing and flexibility. Of course, they spend most of their practice time simply running in preparation for their 6 kilometer races.

Some prospective students are legitimately concerned about the amount of time that participating in a collegiate sport will consume. However, to captain Emily Townsend (’16), “cross country has been my stress-reliever, and the team has been a source of continual love and encouragement in the middle of the difficulties of school.”

And there is certainly much to make the demanding season fun. On homecoming weekend, the team sponsors an alumni 5K for GCCXC veterans. The event includes much reminiscing, great music and lots of chili.

Coach Severson also works hard to include at least one meet per year at a destination location. In October, before competing with over 100 teams at the Greater Louisville Classic, the team had the opportunity to visit the Creation Museum in Petersburg, Kentucky. Later in the month, the GCC runners participated in the Gettysburg Invitational after touring the battlefields. 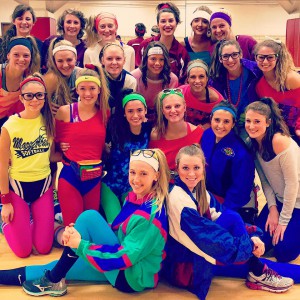 The women’s XC team has a tradition of working hard, but that tradition also applies to playing hard. On the day before the PAC championship, everyone dresses up in 80’s clothes and runs around campus singing hits from the same decade. It’s a great way to de-stress before the most important race of the season.

Rabenold, who was a 2015 captain and MVP, will miss the warm and friendly dynamic of the team. “There’s no drama,” she says. “Everyone gets along with everyone and there’s no talking behind people’s backs. You don’t find that in a group of twenty girls very often.”

Sarah ('16) is a marketing major with a psychology concentration. After spending her junior year in Northern Ireland, she caught the travel bug and aspires to an international career. Her hobbies include making puns, running cross country, speaking in accents and eating apples.
View all posts by Sarah Stites →
Reaching for the Stars
From Grove City to “Sin City”