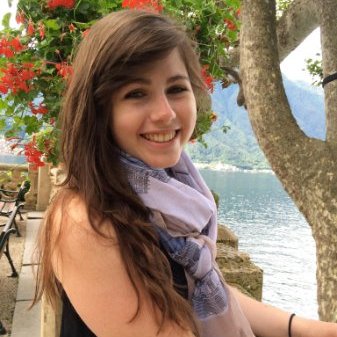 Can you do research at a small, undergraduate, liberal arts college? Yes! Grove City College has a flourishing research program spread among various programs in both technical and non-technical majors. Dr. William Birmingham, the department chair of Computer Science, is one of many professors at GCC passionate about engaging undergraduate students in research. Using distributed artificial intelligent, Dr. Birmingham creates next generation computer games for mobile platforms. Sophia Gebert, a senior Computer Science student, is one of four students working in Dr. Birmingham’s lab.

How did you become involved in research at Grove City College?

Last year while studying, one of my computer science friends began talking about the research project he had just become involved in with Dr. Birmingham. I was intrigued by the work he was describing, which led me to talk to Dr. Birmingham about joining the project. A team of four students, including myself, was formed to develop a mobile game. At the end of last year, we completed the game and have moved forward to begin working on this current project.

What is the research you are conducting?

Our project is to explore the types of games that fit naturally on an Apple TV. We believe that “ported” smartphone, console or PC/Mac games to the Apple TV do not provide an engaging game experience. We are currently developing “Screamin’ Tators,” which is the game of hot potato adapted to a video game. The game involves players connected to each other via the Internet trying to keep potatoes—Screamin’ Tators—off their screen. The game uses simple swipe gestures to move the potato and asks the player or the audience to shout phrases during the game.

My role in the project right now is to develop in-app purchases for the game. Specifically, I am designing power-ups which players can use to sabotage other players, such as adding fog to the opponents screen, as well as defensive power-ups, such as adding grease to the screen to assist the player to move the potato faster. 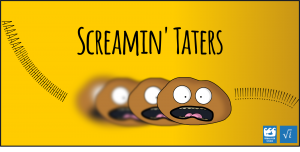 A screenshot of the “Screamin’ Taters” game.

Do you receive any form of compensation for your work, such as class credit or monetary compensation?

Grove City College awards computer science elective credit by considering the class as an independent study. Generally, research counts as one to two credits per semester. In order to receive class credit, you are required to develop a syllabus with your professor outlining what your goals are for the semester. Additionally, you must give an end of the year presentation to faculty and students to communicate your results.

Grove City College also allows students to obtain the IP rights to their game, which they can then use to further develop or sell their game.

What has been the hardest part of your research?

The hardest part of my research was learning how to program on a new platform. It is especially hard because the platform is relatively new, so there has been little previous programming done on it. I was also unfamiliar with the programming language that we are using prior to beginning the project, so there was a large learning curve initially.

What has been the most rewarding part of your research?

The most rewarding part of my research is working with the team to develop a vision for the game and discuss design ideas, then see them come together each week. Being able to transform a creative idea into an actual product makes the work worth it.

What non-technical skill have you found yourself using frequently?

The non-technical skill that I have used frequently is communication. I have learned how to express my ideas effectively and share my opinions with my team members. Communication has been a key component of working as a successful, efficient team.

Since you and two of your team members are all graduating this year, what is the future of this research project?

As I mentioned earlier, the school allows you to obtain the IP rights to any games that you have developed while working as a student researcher at Grove City College. Our team hopes to get the rights to this game so we can continue to work on it, and hopefully sell it, after we graduate. If that doesn’t happen, this project will be handed off to underclassmen to continue to develop it.

Has your research experience shaped your plans for graduation?

My research experience has had a tremendous impact in shaping my plans for after graduation. The project confirmed my interest in mobile development, and led me to pursue a career with a company working in their mobile development sector.

Do you have any final thoughts?

Do an independent study. It is a relaxing learning environment that allows you to work closely with faculty members and build professional relationships. It also looks good on resumes and gives you something to talk about on job interviews. I was able to find my passion through undergraduate research, and all student at Grove City College have that opportunity as well.

Katie Birmingham ('16) is a mechanical engineering major at Grove City College. Ever since she was little, she has had a passion to change the field of medicine through biomedical research. She plans to attend graduate school to pursue her Ph.D. Outside the lab, she can be found on the golf course or at the nearest Starbucks.
View all posts by Katie Birmingham →
Q&A With The #DreamsGoLive Team
The Intramural Frisbee Legends: The TryHards