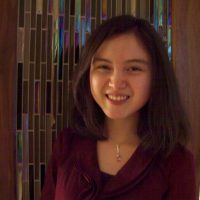 By Alex Watt on March 14, 2017 in Student Spotlights, Student Stories

Bethany Haughey is a junior English major with a wide variety of academic interests, from chemistry to history. She is minoring in biology. I recently had the opportunity to interview her about her experience at Grove City College, and we had a great conversation.

For Bethany, acceptance to the Trustee Scholar program made Grove City College the right choice. Of the seven schools she applied to, Grove City was the only Christian one. At the end of the day, she was excited about two main communities — the community of 2,400 students on campus seeking the mind of Christ and the smaller community of fellow Trustee scholars that she would join. To her, that was better than the Honors College at the University of Maryland.

How did you choose to study English, with so many academic interests?

One cannot get far on this campus without bumping into C.S. Lewis. Bethany referenced his introduction to Athanasius’ On The Incarnation where Lewis notes the importance of understanding the great conversation around us: “If you join at eleven o’clock a conversation which began at eight you will often not see the real bearing of what is said.”

For her, studying English is a great way to catch up on this conversation. But she values other disciplines too: History provides much-needed context, and theology and philosophy tell us what the conversation has said about the most important questions.

When Bethany graduated from Rockbridge Academy in Millersville, Maryland, she wouldn’t have identified as a science person — and she says she still wouldn’t, perhaps especially not this semester. But with such a strong background in the humanities, she wanted to explore science on the collegiate level. Since biology was her favorite science in high school, she has been taking the same classes that pre-med students would take.

She has also been doing independent research on polymers for DNA delivery.

Can you tell me about your research paper?

For Dr. Smith’s Civilization and the Speculative Mind (a HUMA core requirement often called “Spec Mind” by students), Bethany wrote a history research paper on the history of missiology. Studying 18th- and 19th-century China, she followed the development of missionary activity from imperialism, which imposed Western culture, to a more culturally-accepting approach characterized by Hudson Taylor. The paper grew out of her interest in China and in missions — her local church has done regular mission trips to Brooklyn for as long as she can remember, and her frequent participation has shaped her deeply.

Dr. Smith encouraged her to present at a conference, which she did, noting that she appreciates how pro-active faculty are in matching students with opportunities.

You have a longstanding commitment to Chinese as well?

Bethany’s mom is from Hong Kong, and speaks a dialect but not Mandarin. So since fourth grade, Bethany has studied the language and her proficiency was demonstrated recently when she placed third in the US East-Coast Chinese Bridge Chinese Proficiency Competition, where she gave a speech in Mandarin and played erhu, the Chinese violin.

What do you think of Grove City’s Orchestra?

Bethany played in the orchestra in high school and has continued as first violinist. She’s been in the main Orchestra since freshman year, and this year has also had the privilege of playing in the much-smaller Chamber Orchestra. She says it’s amazing how quickly everything comes together (e.g., there is a major October concert, after just two months of school), and that the campus commitment is remarkable. Around ninety students participate and there is always a good turnout for concerts.

What’s next, after Grove City College?

Grove City has really changed Bethany’s answer to this question and she finds herself torn between two paths. On one hand, she is considering medicine, as she enjoys working in the minutiae to serve others; but lately she has also been exploring the possibility of becoming a professor of literature. Her time at college has shown her how influential a good professor can be in a student’s life.

Regardless of what lies ahead, Bethany is confident that what she has learned at Grove City will continue with her, having made her a better person.

Do you have any advice to students considering Grove City College?

Two things: Talk to the students here, and talk to the professors. You will find a wonderful community. Bethany mentions her friends and freshman hall alongside the Trustee Scholars.

Dr. Munson’s section of Civilization and the Arts (“Civ Arts”) is amazing. The HUMA core widens your perspective and allows you to see the context of where we are today on the basis of the past.

Bethany urges prospective and incoming students to think about what they want college to be. And if that vision includes being educated and influenced as a person, she urges them to take an active role. True education is both for the mind and for the soul.

This is part of a series of interviews I am conducting with current students who embody what I most appreciate about the College: Amazing peers who challenge me with their example, reminding me of the words of Paul to Timothy: “Let no one despise you for your youth, but set the believers an example in speech, in conduct, in love, in faith, in purity.” (1 Timothy 4:12, ESV)

Thank you for reading, and to Bethany for taking the time to talk!

Alex is a junior studying Electrical Engineering with a Computer Concentration. In his spare time, he enjoys making music on the piano and the guitar, reading a good book, coding, and always a good meal with friends.
View all posts by Alex Watt →
Major (Life) Changes – My Switch From Communication Studies to Entrepreneurship
The Mountains are Calling – Hiking Near Grove City College