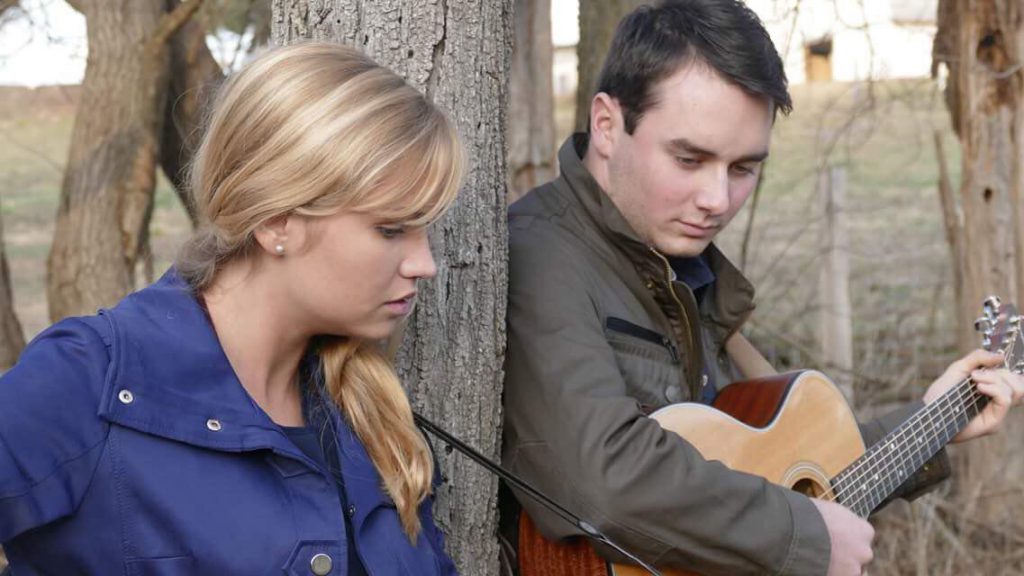 From the Hollow, a singer-songwriter duo, began at Grove City College when Christie Goodwin was asked to perform at Bridgefest – a concert on campus featuring student musicians.

Goodwin is a senior majoring in English Secondary Education from Farmington Hills, Mich. and has been dabbling in art and music for many years. She did not start to sing and write music seriously, however, until her sophomore year in college.

Originally, Goodwin planned to perform at Bridgefest alone, but as the performance day approached, she faced a dilemma. “I realized that I was not going to make it by myself,” says Goodwin. “My music needed to be filled out, and I needed someone more confident than me, so I emailed Corey because we performed together at AEX Live.”

Corey Kerstetter, a sophomore Marketing Management major with a minor in Biology, hails from Lancaster, Pa. He played piano since second grade, bass and guitar since high school, and is currently teaching himself banjo.

Goodwin continues, “We played together at Bridgefest, and after that people responded really well to our music. So we kept playing.”

Together, they formed From the Hollow.

On Feb. 1, 2017 they released their first EP called American Strife.

One of the most powerful songs in the EP is also called American Strife with lyrics as follows:

Baby cries, no one hears
And you regret the last six years
And move away from here
Throw out your line but nothing bites
Maybe that’s a woman’s right
This is our American
American Strife

Goodwin wrote this song at 1 am. “The phrases really fit together for me,” she says, “There’s a sense of hope and also disappointment.”

While they are both songwriters, the songs on their first EP were all written by Goodwin. Kerstetter has written a few songs recently as well.

“Her lyrics convey her message very clearly and powerfully.” Kerstetter reflects, “When we played at Bridgefest, I actually started crying in the middle of it.”

The music these student artists created is hauntingly beautiful and full of meaning. Concerning music itself, Goodwin says, “I want to write music that has a meaningful story. For other people, it becomes a fame thing. To me, music is storytelling. Music should tell a story.”

Both Goodwin and Kerstetter agree that the Grove City College community has supported and encouraged their music. They appreciate the natural music culture on campus, especially highlighting Stonebridge – a student organization which does a lot to bring music on campus and feature student musicians.

A junior majoring in Communication Studies with a passion for reading, writing, photography, and entrepreneurship.
View all posts by Angela Kim →
Minor in Robotics
Student Profile: Graham Allen