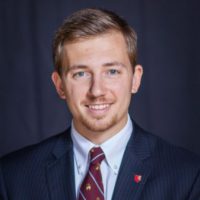 Graham Allen is a junior Mechanical Engineering major who is known for encouraging and exhorting his peers to use their gifts with excellence in pursuit of Christ and his kingdom. He is a very genuine guy and a lot of fun to be around, and I appreciate his willingness to answer a few questions for those of you making decisions about college.

In high school, Graham applied to four colleges and Grove City College was the only Christian one. He was primarily looking for a school where he could be academically challenged, run track, and continue studying Chinese.

So on a utilitarian level, Grove City College was a good choice because he could do all of those things. But Graham was really wrestling with whether to go to a secular or Christian college; he had been to a secular high school and had felt called to that then.

Graham attributes his decision to the Admissions team and to the peace he had about choosing Grove City. He was struck by their spirit of prayer for all applicants regardless of where they would be led and developed a good friendship with Zach Jew. When he visited the campus, he also sensed a vitality and spirit at Grove City when he visited that he hadn’t sensed at the other schools he had visited.

You had some expectations coming to Grove City College. How did those compare with reality?

Graham says his experience has been richer than he could have expected. Referencing Romans 12:1, a verse engraved on the outside of the Student Union, he says his mind has been renewed, especially in terms of priorities. He came to Grove City to focus on academics and run track, and while he has been able to excel in both, God has also reoriented his priorities and he has learned not to idolize school or vocation.

What have you been involved with on campus?

Graham served on SGA last year. He is currently one of the captains of the track team, a member of AEX (a housing group), and a researcher in Dr. Anderson’s lab. Lately he has also been involved in planning a missions conference.

Can you tell me more about the missions conference?

Last year, a large group of Grove City students went to the Urbana Conference. Graham was particularly struck by the largeness of God and the fact that the American church is only one small facet of the Church. We need to find our place and not see ourselves as the top.

Graham talked to Dr. Keehlwetter, who has been hoping and praying for years for an organic missions focus at Grove City. Graham is excited about the interest on campus and hopes that the conference (March 20-24) will help give us a larger view of God and understand our context as a Christian college.

What are your future plans?

Like most of us, Graham has had a number of ideas about vocation. Coming in, he thought engineering might be preparation for seminary. Having learned more about the Reformed doctrine of vocation, he’s still praying about seminary and international ministry but would currently like to work for a Christian engineering firm when he graduates.

What thoughts do you have for prospective students?

First and foremost, dedicate the process to prayer and expect God to answer, even if it’s at the last minute.

Second, when looking at a college, consider that it will be the place you live. Think of it as a home where you will experience all the normal things in life – joy and sadness, ups and downs, triumphs and difficulties. Will this particular college be a place where you will be supported and challenged? Do you want to be like those around you? There is more to college than the credentials you get at the end.

This is part of a series of interviews I am conducting with current students who embody what I most appreciate about the College: Amazing peers who challenge me with their example, reminding me of the words of Paul to Timothy: “Let no one despise you for your youth, but set the believers tan example in speech, in conduct, in love, in faith, in purity.” (1 Timothy 4:12, ESV)

Thank you for reading, and to Graham for taking the time to talk!

Alex is a junior studying Electrical Engineering with a Computer Concentration. In his spare time, he enjoys making music on the piano and the guitar, reading a good book, coding, and always a good meal with friends.
View all posts by Alex Watt →
Student Artist Survey: From the Hollow
How To Get Involved on Campus