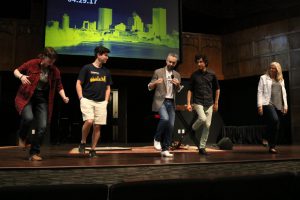 Recently, creatively-minded Christians have produced art that, while not intentionally bad, speaks only to the redeemed. This movement has managed to appeal to Christians but has altogether remained unappealing to those who do not feel welcome to the church. This does not mean the art is bad; again, I think it has tremendous value to those already in the church. However, this type of art has only a certain market it can reach.

Two Grove City College alumni realized this, and in 2015 Nate Mancini ’13 and Johnny Sikma ’13 sought to reach out to the community of Christians in the arts. They created a festival geared toward faith-driven artists called the Forefront Festival. The end goal was to bring together Christ-followers who are passionately pursuing the arts and offer them an encouragement to strive for excellence while still being accessible to those outside of the faith community. The result of their efforts was an event that produced worthwhile art while not pandering to a faith-based market.

“We wanted Christians to return to the forefront of the arts — to be the kind of people who shape culture and start art movements — so Forefront Festival seemed an appropriate name,” says Mancini. You look at many of the art movements of yesteryear, and there is a distinguishable pattern of strong Christians striving towards a universally recognizable standard.

I had the privilege of attending the first festival, and I can attest to the caliber of excellence. Photographers, authors, painters, dancers, and critics alike came together to discuss the profound impact their faith had on their work, be it explicitly faith-based or not. Nate and 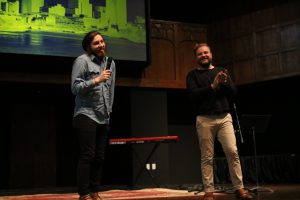 Johnny premiered a film that they co-wrote and produced, not about a Christian’s struggles, but about a human’s struggles. Despite the lack of “I am a Christian” message, it still spoke to the need of a greater fulfillment and purpose that Christians only truly find in their relationship with God and, as artists, in displaying his truths.

Not long after the first festival, Nate approached Rich Christman ’14, and the event began to form into a second incarnation. Johnny moved to Los Angeles, and Nate “asked [Rich] if [he] would like to come as his partner in Johnny’s place.” Rich said of course, and they quickly began to form a greater vision. They didn’t just want events to be the premier resource Forefront had to offer, but the people who would attend the events. They created an online platform for Christians in the arts to connect and collaborate.

Sadly I wasn’t able to attend Forefront ’17, but they upgraded the experience significantly. Not only was there a festival to exhibit artists, 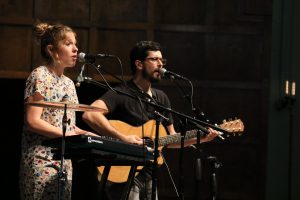 but also a conference to host lecturers (primarily the featured artists) to discuss their craft, be it directly related to their faith or not. While Forefront ’15 feature Pittsburgh-based artists and favors from friends, Forefront ’17 featured “artists from six different states… as well as two different countries,” including a TED Fellow.

Forefront has grown significantly, with a drive not only to promote the creators, but rather the creatives. Who knows what the next Forefront may hold? Maybe you could be a part of it.

Robert is a Senior Communication Studies student with minors in English and Theatre. When he is not on the stage in a production, he is most likely either nose-deep in a book, (averagely) playing guitar, singing his heart out in the shower, or sitting around, deep in conversation with friends.
View all posts by Robbie Davis →
5 Easy Ways to Stay Organized in College
What to Know: Breen Student Union