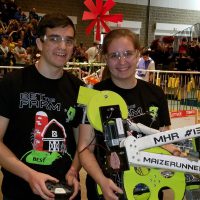 By Stephanie Millage on October 31, 2017 in Engineering

The BEST (Boosting Engineering, Science, and Technology) competition presented by Elliott Group was hosted by Grove City College on October 13-14.  The BEST competition is a “middle and high school robotics competition whose mission is to engage and excite students about engineering, science, and technology as well as inspire them to pursue careers in these fields” (bestinc.org). The teams worked for the past six weeks to create a functioning robotic machine that can complete certain tasks in three minutes. This year, 22 teams and approximately 400 students competed at the Arena in the Physical Learning Center at Grove City College. 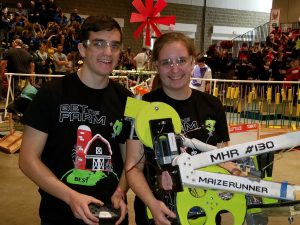 Elsie Becker and her brother Dirk holding their robot.

I was homeschooled in high school so my robotics team was not associated with a specific school. Instead, we operated as a non-profit organization. Our team name was “Metro Homeschool Robotics.” We were based near Kansas City, Missouri. However, we attended both our Hub and Regional competitions at the University of Fort Smith in Arkansas. Honestly, I joined BEST Robotics only because my brother was going to join. I actually had no interest in robotics itself. BUT I STAYED BECAUSE I FELL IN LOVE WITH IT! During my first year on a team (my junior year of high school) I realized how much BEST has to offer. Besides promoting STEM through the building of robots, BEST also simulates a corporate environment where students are challenged to build a tradeshow booth, give a marketing presentation to judges, and document everything they do in an Engineering Notebook. Through my participation in these aspects of the competition, I fell in love with BEST and actually became my team’s student leader the following year.

After only one year in BEST I had learned enough to run the team. Because BEST is an entirely student-driven competition, as team leader, I managed schedules and deadlines, delegated tasks, ensured project completion, oversaw documentation, and handled conflict management. Other members of my leadership team managed other aspects of the BEST robotics challenge like the marketing presentation, team exhibit, building of the robot, driving of the robot at competition, spirit and sportsmanship, and much more.

One of the most challenging aspects of the competition is that you are only given six weeks to brainstorm, design, prototype, test, build, wire, program, drive, and compete with a fully functioning robot. BEST simulates in miniature the entire engineering design process that engineers would go through in a real world scenario. Another challenge that BEST presents is that of conflicting ideas. Many team members have differing ideas about how to build the most successful robot possible. Conflicts arise as a result. Through these conflicts students learn how to argue and resolve issues with their peers so that through compromise the team can benefit as a whole. The competition itself serves as an exciting test of each robot’s abilities as well as an array of networking and human resources opportunities. Students from different teams are able to come together and learn from one another, building relationships that sometimes last long beyond high school.

Participating in BEST Robotics did influence my decision to come to Grove City College. Most of the other schools I was considering were small liberal arts colleges similar to Grove City. However, none of them had STEM-related majors available on their campus. Since most of my friends are people that I met through robotics, I knew that having those sorts of people (engineers, math and science majors, etc.) on campus was very important to me, even though I am an economics major. Also, the fact the Grove City hosts a Hub competition for BEST Robotics was one of the things most exciting to me. Being able to continue in my passion for BEST as a volunteer was a huge motivating factor in my decision to attend Grove City College.

I am a senior Business Management major who enjoys crochet, traveling, and all things historical.
View all posts by Stephanie Millage →
Opportunities in Entrepreneurship: Startup Weekend
Lydia Sutton- Experience at BEST Robotics Competition