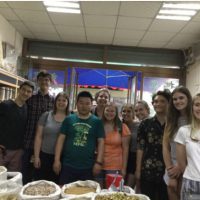 In the fall, Professor Sweet taught a class endearingly called Internet Content Marketing. In this course, students learned the importance of tailoring content to particular audiences in order to make a profit or showcase credibility. Towards the end of the semester, Professor Sweet asked the students to put their lessons into practice and write articles for this blog. As the editor of this site, I had the awesome opportunity to read all of these articles and choose the ones that I thought our readers would find most interesting. This particular piece is by David Cheung, he describes his trip to China for class credit. Enjoy!

This past summer I had the amazing opportunity to go to China for class credit. We got to go to the cities of Shanghai, Suzhou, Nanjing, Xian, and Beijing. This trip was led by Dr. Hogsette and Dr. Ayers, who could not have been better chaperones. Also, nine other Grove City students were part of the trip. Almost all of the students took the Civ Lit Class that could be completed on the trip. My friend Gabe and I were the only students who chose the other option, a Chinese Culture class. This was due to Gabe and I being Chinese minors. We left for China May 21st and returned on June 2nd, so we spent a total of about 10 days, spending two days in each city.

Despite my high opinion of the trip, it ironically started out very poorly. This was not a failure on the College’s part or the professors. In fact, it was completely my fault that the trip had such a difficult start. It was early in the morning on May 21st. I was on my way to Pittsburgh to fly out from the airport there with the rest of the group. Once I arrived with all my luggage and met up with my fellow students, I reached into my pocket to get my passport. That is when my heart rate shot through the roof, because I realized I had forgotten my passport and visa! Turns out, I left it at my house which was two hours away. The speed with which I sprinted to my car could have shattered any sprinting record in PA. I was able to get ahold of my uncle who went to my house, grabbed my passport, and met me halfway back to my house. At this point the time was around 6 a.m. and my flight was scheduled to leave at 7 a.m. I reached the airport at about 6:50 a.m., turning an hour drive into a 50-minute one. At the airport, everything was a blur. I remember everyone in the line for screening, allowing me to cut past them in order to make my flight, and sprinting down the long corridor leading to all the different flights. Of course, my flight was one of the farthest possible, which made me completely out of breath when I reached the front desk. The man giving me my luggage tag and scanning my ticket seemed a bit irritated at how close I cut it. I checked my phone for the time which was 6:58 a.m. Once on the plane, everyone clapped and I sank into my seat with both embarrassment and relief.

Thankfully, this was the worst part of the trip by a very large margin. After enduring a 14-hour flight, we reached our first destination, the city of Shanghai. The sites we got to see were beautiful. The Jade temple we visited was a famous Buddhist temple and people were constantly walking around praying to these statues that are set up all over the place. Particularly the white jade Buddha is the one that is famous. They hold it in such high regard that no pictures are allowed to be taken of it. It was a little off putting, being a Christian inside a temple dedicated to the worship of these statues, and with monks chanting all over the place. I was intrigued by how much the Chinese people hope in and have reverence for these Buddhas. It showed a lot of us on the trip how blind we are to the world outside the US, and even just outside of our little college. The experience was a powerful one, and we gained insight into the cultural values of China. We also visited other more typical tourist destinations in China, such as the Great Wall. This vast and seemingly unending wall was beautiful on the mountainous landscape of eastern China. 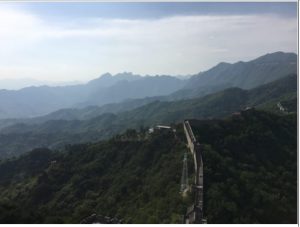 It was a tiring, but rewarding climb up the large steps to get to the higher points of the wall. We also saw the world famous Terra Cotta Warriors museum, which had many different statues who were buried in the giant Tomb of Emperor Qin. Our tour guide told us that they protect the Emperor in the after-life. The Emperor believed that every clay item that was buried with him would go with him to heaven, so there were clay animals, bowls, pots, servants, and many other things.

Even though these sights were very grand and beautiful, my personal favorite place we visited was the Nanjing University of Traditional Chinese Medicine. We were able to talk to Chinese college students that were our age. It was so cool to compare our experiences with theirs. They would attempt to practice their English with us, and we would do the same with Chinese. They had many different demonstrations ready, to show us their medical practices and beliefs. They placed a high importance on using herbs to heal illness rather than turning to medication. Also, they view the body as all being connected through energy pathways. This energy is called “chi.” It is easy to disregard this idea, but there has been some amazing feats performed by the Chinese people as a result of this concept. We also got to see their beautiful garden that they grow all their herbs in. It was breathtaking when w 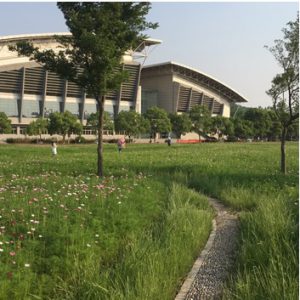 e laid eyes on it.

A professor from the college led us through the garden describing all the plants as we continued along. When the time came to say good-bye to everyone at the university, they gave us all gifts to take back with us. They were such gracious hosts, and a lot of us quickly became friends and exchanged numbers. I kept in contact with them for a while after the trip and I now have lots of friends to practice my Chinese with.

Everywhere we went, our meals were all so delicious. No matter where our location, there were always vegetables cooked perfectly with a dark sauce of some sort, many kinds of chicken dishes, and of course endless amounts of tea. Also, all meals required us to eat with chopsticks, and to eat “family-style.” This means that all of the food is in the center of the table, and people grab small portions of it at a time to put on their individual plates. This is very different from in the US where we all get our own dish. I personally loved “family-style” eating because it allowed me to try everything. There are also a lot of very unusual dishes we ate while in China. A few such foods were jellyfish, sea slugs, sea cucumbers, and cow stomach. Some of these dishes were 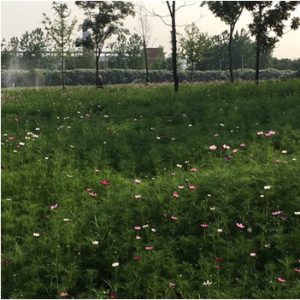 completely different from what you would expect, such as the jellyfish being crunchy. On the other hand, some were exactly what was expected like the sea slugs have a slimy texture. Most of these dishes I thoroughly enjoyed (with the exception of the jellyfish) and am so glad that I was able to try this cuisine. I was hesitant to eat all of this crazy food at first, but by the end, I was eating duck eyes and not thinking twice about it. The fact we all got to try these new things together helped all of us students get closer as we marveled at these unique foods. Furthermore, the Chinese culture also believes in long meals that you leave only when you cannot take another bite. This made it so we spent a lot of time getting to know each other within the group.

Everyone in the group really got along well with each other. There was not a single person that I had any complaints about on this trip. Each person was included, no matter what we did. I largely contribute it to the fact that we all had to watch out for each other when we had free time, because we did not have a tour guide to take care of us. None of us were fluent 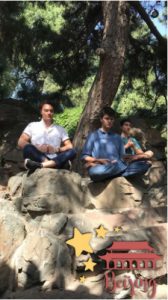 in Chinese which made it very difficult and dangerous to be alone. However, as a result, everyone got to know each other very well. The friendships we formed continued even when we returned back to the States. We still try to grab a lunch as group every once in a while, and we have an ongoing group chat. I became closer with everyone on this trip, but much more so with the two other men that went. There were only three male students on this trip: Travis, Gabe, and myself. I was acquainted with these guys before the trip, but did not know them all that well. Gaining all these new experiences together really bonded us. We had to experience jet-lag together, eat all our meals together, sleep in the same room, shop with each other, and hangout during our free time. Every night we would re-hash everything that happened and talk about how excited we were for the next day. Nothing was ever boring with these guys, and yet I always felt relaxed around them as well. Us three still get tea together every week and are even better friends since the trip. Without going on this trip, I would have never had the great opportunity of getting to know these individuals. 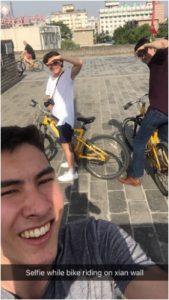 I highly recommend the trip for anyone. There were so many benefits to going. I completed a class, got exposure to a different culture, got to know professors, tried new foods, and formed so many amazing friendships. I had been to China two other times prior to this Intersession trip. They do not compare to the experience I had while in China with this group. I doubt I will ever have quite the same experience again, unless I go on another trip with Grove City. If you are able to go, do not miss out on this opportunity. In looking back at it, I know it was no doubt worth every penny. 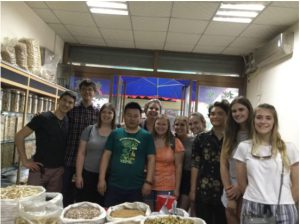