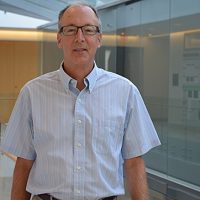 By Emily Stein on April 10, 2018 in Chemistry, Faculty Spotlights

As the senior member of the Department of Chemistry, Dr. Timothy Homan has seen a lot at Grove City College, and I enjoyed being able to sit down and talk with him. Specifically, he mentioned that he has seen five offices, six college presidents, and the hiring of all seven of his colleagues in the department. After attending a small college in North Carolina for undergraduate, the University of Colorado for graduate school, and the University of Minnesota for post-doctoral studies, Dr. Homan spent a year teaching at Anderson University in Indiana. He learned about Grove City in the news, and soon applied here for a faculty position. He was initially rejected, but later was hired and has been here for 27 years.

For the last 14 years, Dr. Homan was the chair of the Department of Chemistry until recently handing the reigns over to Dr. Augspurger. He has served on a plethora of committees during his time here, spending the majority of his time working on the department’s accreditation with the American Chemical Society. He has also seen many big transitions in campus life, including new buildings, the abolishment of Saturday classes, students being permitted to walk on the grass, and the transition from having chapel four days a week to two days a week. He also mentioned that he has even begun to see the children of students he taught during his early years come and learn from him as well.

Although he will not be here next semester, Dr. Homan is still confident in the work done by his department. He and his wife (Dr. Kristin Homan, a psychology professor at Grove City) will both be taking sabbaticals to work as visiting scholars at the University of Wisconsin. While there, he will be working in the Department of Pharmaceutical Sciences, and he hopes to gain knowledge that he can bring back to Grove City to help develop a medicinal chemistry class.

One of the things Dr. Homan emphasized while we were talking was the principles that Grove City holds. Originally, these principles were what attracted him here. At the time, Grove City was involved in a Supreme Court case, and Dr. Homan was impressed by a college holding so firmly to its beliefs. This has not changed in the time he has been here, and he commented that “[the] principles on which the College has made its stake have been kept.” He also mentioned the commitment to science that the College has had the entirety of his time here. “One of the things I appreciated…from the very start, is the College’s commitment to science education…the College is willing to support our sciences financially, and I’m not so sure you’re going to find that level of commitment [elsewhere].”

After 27 years, Dr. Homan was able to comment very accurately on the strengths of Grove City’s Department of Chemistry. “In the years I’ve been here, we offer a very strong major and our graduates are very successful. You work hard, but I think you’ll find the department… [wants] to see you succeed and we are here to help you succeed.” He mentioned specifically the opportunities that are available to students, through research and their time in the laboratories and the classroom. Dr. Homan also had high praise for all of his colleagues, both for their work in the classroom and for the relationships they are able to build with students. “I think you’re going to get an excellent education, but it’s not just going to be an academic education. I think the life and Christian commitment of the institution is going to provide a great experience for you as well, and I think you’re going to be shaped in a way that will lead you to a good life.”

Dr. Homan has been an integral part of the education of countless students during their time at Grove City College. His reputation speaks volumes for the care he puts into his work, and the relationships he builds with students have a greater impact on them than many people could even imagine. Although I only spent a small amount of time with him, I can say with complete confidence that Grove City is blessed to have such an exemplary professor and person on our campus.

Emily is a sophomore Accounting & Business Management major at Grove City. She hails from the Pittsburgh area, is the youngest of three siblings, and the owner of two cats. When she doesn't have her head buried in a book, she can be found listening to music, enjoying food, or hanging out with her friends (or all 3 at once).
View all posts by Emily Stein →
Professor Spotlight: Dr. Guevara
Looking Forward to Junior Crimson Day