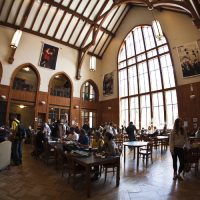 By Tobin Goss on April 19, 2018 in College Advice, College Search

I am pretty sure that my first year here at Grove City College I ate pizza almost every single day. And when it was not pizza, it was most likely chicken tenders (with the occasional cheeseburger). I have always been a very picky eater and when I came to college I became exposed to a variety of different foods that I had never even heard of, let alone seen before. Being able to get creative with your food here, and probably at the majority of colleges, is important. I have learned of many different foods that you can make with what is usually provided. For example, there is a panini press at certain food stations and you can grab a tortilla shell and fill it with cheese. If it is a day that we also have grilled chicken, which is most days, you can add it in. Put it in the panini press and you have a quesadilla. If you want a dessert other than the usual cookies and ice cream already provided, you can make your own version of a Rice Krispie treat. Take a bowl with peanut butter, marshmallows, and chocolate and warm it up in the microwave. Just add some cereal and you are all set.

Also, do not judge a book by its cover. Sometimes seeing a food that you have never seen before can sway you away and even make you a bit questionable toward it, but I have learned that even though a food may appear to be unappetizing, it could actually end up being decent. I have become much less of a picky eater just by trying new things here and being adventurous with the different foods that are provided. You will never know what you may end up liking if you never give new foods a chance.

If you ever get really sick of the food on campus, there are a majority of off campus (and priced for college students) places that will deliver to the college. Coffaro’s Pizza has a special where you can get a pizza and four drinks for under 10 dollars. If you want a break from studying, there are also many places you can go and sit down with your friends to enjoy a good meal. Rachel’s Roadhouse is a popular place that students like to go to on Thursday nights to get 35 cent wings.

It is all about being open-minded, trying new things, and being creative. Coming in as a freshman who was an incredibly picky eater, I never would have thought I would try some of the foods I have or be survive with the options they provided. So, if I can survive with the food here, you can too.

Tobin is a Senior Accounting Major who is an active member of the Sigma Phi Omicron housing group. He enjoys playing intramural sports, fishing, going on camping trips, and just hanging out with friends and family.
View all posts by Tobin Goss →
Community Spotlight: December Graduate
Reel Life at Grove City College: A Chat with Andrew DiDonato, Professor of Exercise Science and Head Football Coach