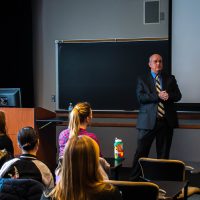 By Taylor Starcher on May 4, 2018 in Communication Studies, Inside Student Life, Interesting Speakers, Spotlights

Trisha Pritchard’s public speaking class had the pleasure of meeting Bill Flanagan, a Pittsburgh local and strong community figure. Bill is currently the chief corporate relations officer for Allegheny Conference for Community Development and host of WPXI-TV’s “Our Region’s Business.”

With 25 years of full-time TV news, Bill has had a remarkably amount of experience and continues to learn these useful lessons. He has learned to focus on the main points, considering the majority of people watching the news are multitasking. “I’ve learned to speak to a 6th grade level, not because people are illiterate but because they just are not paying attention,” Bill said. Consuming media comes with a million other distractions going on around them like getting ready in the morning. Bill emphasized that if people can remember one sentence during the entire six to seven minute story, he has gotten the message across. Framing the talk into three main parts makes it easier for people to remember the important points and reinforce the message. Making a simple, yet meaningful broadcast is what will impact the community the most.

Bill has had his share of experiences while involved with journalism and broadcasting, but he discussed some of his favorites and most memorable. The first news story he ever covered was President Richard Nixon’s resignation, which was a strong start to his career. He also accidentally interviewed President Ronald Reagan, who was about to board the plane awaiting him. Bill’s producer was signaling him to wrap up his news story explaining about Reagan’s current activities, when Reagan thought he was being called over to be interviewed. On the spot, Bill had to ask Reagan a couple of questions, which was a great lesson about organizing and producing content quickly while not cracking under intense pressure. He recalls painful interviews and stories covered, like talking to a family after a loss of their soldier son or the bombing at a Marine base in Lebanon. Bill emphasized finding a connection with people even in the worst situations and celebrating everything he can, like the giving life of a fallen soldier.

In having a Sunday morning talk show for 30 years, Bill has learned that drawing out his nerves gives him the right energy level to focus and interview people to the best of his ability. He stresses how the interviewee is just as nervous, if not more, and needs to rely on Bill’s ability to ask the fair and honest questions they need to give the answers they want. When Bill focuses solely on the person he is interviewing instead of himself and has “done his homework of preparation,” he finds he is not nervous at all for a TV interview.

Bill also discussed the importance of interpersonal communication in everyday situations. Having a job requires one to be able to work well together, deal with confrontation, know how to public speak, and be open with a boss or someone of higher authority. In his specific region of work, Bill deals with people coming in and out of a career.  He must know how to handle the changes in a work environment without disrupting the business as a whole. When the majority of the “Baby Boomers” are getting close to retirement, he needs to recruit members of the younger generation to fill the needed positions. Bill places emphasis on taking skills seriously, especially with the younger people entering the workplace for the first time.

Businesses are always competing. Bill is constantly working toward improving region’s competitiveness to make it more attractive to other businesses to invest in, ultimately maximizing profit. With all of the opportunities opening up, it is extremely valuable to have employees prepared for their future career. This means having students well equipped in college and focused on the subjects that they could potentially be involved with. Chances like internships are relevant in that people can “decide what they want and go for it,” as Bill said.

The relationships that he has made throughout his career has given him the skills to establish new, reconnect, and connect others. Bill has had a major success in using his relationships to better the community, like organizing 100 organizations around the same message, to strengthen one another at the end of the day. Bill’s closing remarks consisted of prioritizing the development of communication with people, challenging one another with different viewpoints, and ultimately coming together as much as possible. “Narrow pathways do not lead to a great result,” Bill said. Let us remember that opening our eyes to understand others and their ideas, no matter the situation, leads to a better world altogether.