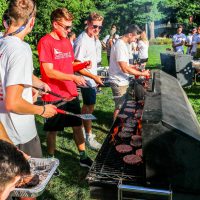 On Sept. 15, the Omicron Xi (Okie) fraternity and Sigma Phi Omicron (CRON) housing group teamed up to throw a tailgate cookout on lower campus in preparation for the annual night football game. This was the fifth time the event has taken place to show school spirit for the game.

The event was a classic tailgate cookout: grills in place to cook burgers and hot dogs, cornhole sets, spikeball games, volleyball, and bocce ball rounds all acted as a draw to get students to come down to lower campus. Grove City experienced beautiful weather for the event, which usually acts as a huge draw to get students outside to hang out with their friends.

Dan Gibson, president of the Okies, estimated there were about 500 students present for the cookout. Toward the end of the event, to mark its conclusion, the Wolverine Marching Band came down Rainbow Bridge and warmed up a few songs with the crowd before everyone made their way to Thorn Field to take the stands to cheer on the Wolverines.

This cookout concluded a three-day series of cookouts on Grove City College’s campus. While all three were unrelated and catered to different demographics of students, many found it as a great way to welcome in a new semester by spending time outside with their friends, enjoying the nice end of summer weather and their friends’ company.

Although Grove City fell to Case Western in the football game, the student section was rowdy to cheer on the Wolverine football team. The night game is one of the best attended football games each year due to the unique atmosphere it creates for students and families in the community. The postgame celebration featured fireworks, and although the team did not secure a victory, the campus certainly won by having a day filled with community, camaraderie, and school spirit.

Garrett is a senior at Grove City College majoring in Communication Studies and minoring in Entrepreneurship and Design.
View all posts by Garrett O'Toole →
Event Review: Fall Fest 2018
Event Review: Meat and Greet