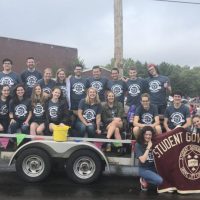 By Garrett O'Toole on October 26, 2018 in Campus Events, Campus Organizations

Grove City College’s annual Homecoming was Oct. 6, and brought thousands of alumni and families back to campus, along with the families of current students. While many students and alumni attend these events to connect, whether from their fraternity, sorority, or housing group, Student Government Association (SGA) partakes in the festivities due to their wide-reaching network on campus. Regardless of other commitments as a student, SGA is one that can be held concurrently with many other positions, which creates a unique opportunity to get a wide range of students involved with the organization. As a result, SGA has a tent on upper campus for fellow SGA alumni to stop by, while the current members mingle.

Current student members also participate in the Homecoming parade each year. Apart from decorating their truck and float, they also throw candy into the crowd as they drive through the parade. With all of the children on campus for this event, this is easily one of the best parts, getting to see the smiles on all of their faces getting candy. Once the parade is over, SGA members take a shift at their tent to hand out caramel apples for attendees.

SGA orders 600 apples to hand out and hundreds of bottled waters, which worked out well because this year the weather was warmer than usual. The caramel apples are always a hit with attendees, as SGA usually runs out before the entire duration of the event is even over.

Each year, it is always interesting to hear stories from alumni that were on SGA during their tenure as students. Even the College’s own President McNulty served as the SGA Vice President of Social Affairs while he was a student here. These stories would most likely not be heard without the opportunity for SGA to participate in the Homecoming festivities each year.