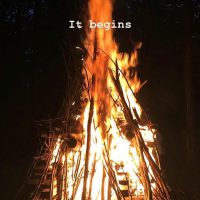 The event is widely known for its oversized bonfire, where at times nearby surrounding trees are charred from the heat and flames. During the day, many students are often busy with Homecoming festivities, whether it is with another group they are part of or with spending time with their own family, so the event is a great way to wind down a packed day.

The guys purchase apple cider from Emmett’s Orchard, a nearby apple orchard, for attendees to consume while chatting with their friends around the fire. While it does not seem like anything overly special other than being a large bonfire, the event is designed to foster community by having a fun and safe night to hang out off campus with friends.

In the midst of the event, there is an interesting tradition that takes place each year: a story telling time featuring a character named “Wakajankaga.” The tradition was started several years ago by a past group member who was incredibly theatrical and talented enough to make up the entire story on the spot. The time is meant to be a comedic relief, and a sort of “halftime show” to pull all of the attendees in to focus on one thing for a moment. This year’s rendition was special, as the group decided to conclude the character’s story arc, opening the door for new possibilities for a story for next year.

The event is primarily advertised through word of mouth, social media posts, and emails to friends (only because the space can hold so many people). Throughout the night, the group estimates that about 400 people attended the event, making it one of the higher attended years that this event has taken place.

Garrett is a senior at Grove City College majoring in Communication Studies and minoring in Entrepreneurship and Design.
View all posts by Garrett O'Toole →
SGA Homecoming
Double Chapel Credits