By Gretchen Blizzard on November 9, 2018 in Inside Student Life, Student Stories 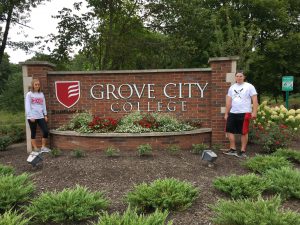 Sophomore Gretchen Basham had an older brother, Sam, attend Grove City at the same time as her last year. When Gretchen was just coming to Grove City as a freshman, she had her brother on campus as a senior. When talking to Gretchen about what college was like when she went here with her brother this is what she had to say, “Going to college with my brother Sam was a good experience for me. He made coming to a school where I didn’t know anyone more comfortable. He was always across the way if I needed anything, and he was instrumental in introducing me to his friends, which added to the familiar faces on campus and led to new friendships.”

Gretchen told me, “Now that Sam has graduated I have realized how much I enjoyed him being here. His steady presence allowed me to be able to get advice and insight from his experience. We grew closer during the year we were at school together and now that he has graduated that has become more obvious.”

Gretchen said she had an expectation of going to college with a sibling and that it was as if she would feel like they were keeping tabs on her or that she would be annoyed by seeing her sibling everywhere. She told me that she was pleasantly surprised by the way she grew closer with her brother at college and the freedom she was still able to maintain while at Grove City.

Gretchen has a younger sister, Meredith, who is a senior in high school. Gretchen encouraged Meredith to apply to Grove City, and hopes they will form a stronger relationship, and have the joy of knowing she has a sibling around campus to always talk to once Meredith arrives here.

Personally, I have a younger brother, Lukas Blizzard, who is a senior in high school and applying early decision to Grove City. I encouraged him to apply and was able to share different perspectives and campus experiences with him that made him excited about the College. I look forward to experiencing college life alongside him and helping to guide him along the way.

I am a sophomore Marketing major at Grove City College, and on campus I am involved with the Women's Club Lacrosse Team, and the New Life Ministry group.
View all posts by Gretchen Blizzard →