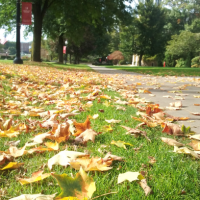 You are a junior looking for an internship and Homecoming weekend is quickly approaching. You have just gone through one of the most stressful months of your life, where you had a multitude of tests, had to update and re-write your resume and cover letter, and spent hours on end networking and interviewing both at your college’s career fair and in on and off-campus interviews. After going through a month of this, only one thing could make everything feel worth it. No, this one thing is not a fine dinner at Hicks dining hall, it is an internship offer!

In approaching the weeks following the stressful month before, I wondered what else I could do, or where else I could apply for internships. It was during these following weeks that Grove City College held its annual Homecoming, which was a time for students to relax and alumni to come back and visit the college. It was during this time of relaxation for me that I, by chance, ran into a past member of the Crons (the housing group, which I am part of on campus). Upon discussing with him the current state of the group, I later found that he worked in the field of accounting, and not only did he work in the field of accounting, but he was a shareholder for a firm and they were looking for interns for the summer. Throughout our discussion we exchanged information, which later allowed me to not just contact him, but set up an interview at his firm’s office, which later led to an offer from the firm for a summer internship position.

Who would have thought, that after one of the most stressful months of my life that I would, in my “relaxing week” of Homecoming, randomly run into someone and that our discussions would turn into a later job offer? Is it not funny how God works? As you find yourself in a similar situation as I in the upcoming years, I urge you to remember my story and to have faith in God, because he is always doing works in your life, even when you think it is time to relax.

23 The Lord makes firm the steps
of the one who delights in him;
24 though he may stumble, he will not fall,
for the Lord upholds him with his hand.

Tobin is a Senior Accounting Major who is an active member of the Sigma Phi Omicron housing group. He enjoys playing intramural sports, fishing, going on camping trips, and just hanging out with friends and family.
View all posts by Tobin Goss →
I Spent a Week Without a Phone (and I Survived)
Audit Internship Tips I: An Introduction to The Process