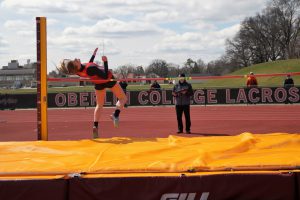 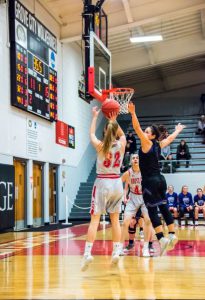 Gretchen Taking a Shot on the Basketball Court

Gretchen Elsey is a sophomore here at Grove City College, majoring in Exercise Science, while also pursuing a Nutrition minor. When Gretchen is not in the classroom, you can most likely find her on the basketball court or on the track. That is correct, Gretchen plays two different sports at the varsity level for Grove City College. Gretchen is a shooting guard for the women’s basketball team, and she does mostly high jump, with a little bit of long jump for the track and field team.

Gretchen said it takes drive and discipline to play two varsity sports at the collegiate level, but she said she would not want it any other way. When I asked Gretchen about the time she must commit to both sports she said, “Basketball is definitely much more demanding because the season is so long. Our basketball team does a lot of community service projects as well so it’s not just basketball practice every day and it’s super cool to be able to reach out to the community and form those relationships. Whereas track is a little different because I miss a large majority of the indoor season because of basketball. They both take the same level of commitment though, in both sports, the team and coaches are relying on you to show up and focus in to get 1% better each day.”

Gretchen said she had always planned on playing two varsity level sports when she decided to come to Grove City College. I asked Gretchen if she prefers one sport over the other and she said, “That’s a tough question because they are so different. Track is nice because its more individualized in a team setting and it’s scored as a team event, but it heavily relies on how the individual performs. Basketball is 100% a team sport and everyone needs one another to perform at its best.” Gretchen said she has recently excelled more in track, but that basketball has taught her a lot about being mentally tough, which she can carry over from the court to the track.

Advantages coming from playing two sports, according to Gretchen, are all the friends and connections that are made and being like a big family with your team. She also said playing two sports really teaches her how to manage and balance her time effectively. Gretchen said some disadvantages are having less time for relaxing and taking naps, and that trying to make plans can be difficult because there is often a lack of free time.

I asked Gretchen how she manages her time when she is in the heat of her sports seasons, and she said, “It can be challenging but having very little free time really makes you have to do your work in between classes or right after practice. I’ve always been bouncing around from sport to sport and keeping busy, so for me it’s still the same routine.”

I also asked Gretchen how she focuses on academics when she is in the thick of her two different schedules, and she said, “It can be hard at times especially when there are those weeks where it feels like you have absolutely everything due and five exams and no time to do any of it, but I know that in a few years I won’t have competitive sports anymore so ultimately, I’m here to focus on my academics because that will follow me after my college career.”

Gretchen Elsey is the 3rd on the team in 3-pointers, and a two-year letter winner for the women’s basketball team. When it comes to track and field, Gretchen is the 2018 Presidents’ Athletic Conference (PAC) outdoor high jump champion, 1st Team All-PAC, she has been named PAC Rookie of the Week twice, she has been named ECAC Rookie of the Week twice, she is the 2019 PAC indoor high jump champion, and she is the indoor record holder for women’s high jump at Grove City College.

I am a sophomore Marketing major at Grove City College, and on campus I am involved with the Women's Club Lacrosse Team, and the New Life Ministry group.
View all posts by Gretchen Blizzard →
Grove City Good Eats
Sorority Spotlight: The Sisters of Phi Sigma Chi