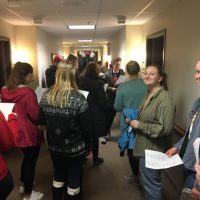 When prospective students think about college, many times their minds are drawn to big things like classes, professors, sports, fraternities or sororities, and dining. However, many times the most memorable and fulfilling moments of college happen within the many small organizations and clubs offered on campus.

The Student Athletic Advisory Committee (SAAC) is made up of student athletes who act as a voice in Division III athletics for the 20 varsity athletic teams at Grove City. Each varsity team has two members on the committee, totaling 40 members. I am one of the varsity Men’s Soccer team’s committee representatives, and I also act as the SAAC treasurer.

The Student Athletic Advisory Committee is a national organization that stems across all three divisions of collegiate athletics. The committee is broken up into three levels: national, conference and campus. The national committee meets to discuss new legislation for collegiate athletics that our campus SAAC then gets to vote on. The conference committee addresses issues within their individual conference. The conference committee that Grove City is in, the Presidents’ Athletic Conference (PAC), consists of one representative from each school in the conference. Lastly, there is the campus committee, which consists of the two representatives from each varsity team.

The mission of the SAAC is “to enhance the total student-athlete experience by promoting opportunity, protecting student-athlete welfare and fostering positive student-athlete image.” The Grove City SAAC accomplishes this in a multitude of different avenues.

First, representatives get to offer their input and ultimately vote on rules, regulations and other policies that affect student athletes. Whether that be on the national, conference, or campus level, each representative acts as the spokesperson for their team when new legislation gets brought up.

Another task of the SAAC is to build a sense of community within the program of athletics at Grove City. One way they do this is by giving each athletic team a “buddy team” of the opposite gender. For example, Women’s Water Polo may be paired up with Men’s Basketball. That buddy team is supposed to support the team they are paired with as best as they can. Whether that be getting the whole Men’s Basketball team to go to water polo games with their chests painted, or simply writing them good luck notes before games, these pairs provide more intentional and personal support.

The SAAC also helps organize community service efforts. These efforts could be raising money for a family in need, Christmas caroling, or decorating cookies for a local nursing home, the SAAC is always looking to help better the community.

The Grove City SAAC has really had a great impact on me over the past two years. I have seen how much it means to a team when the SAAC helps get hundreds of students to one of their games. Being on the soccer team myself, there is no better feeling than having a packed house. Also, having a voice in national, conference and campus endeavors is a great feeling. It shows that Division III athletics really cares about the needs and opinions of their student athletes.

The SAAC meets monthly to discuss legislation, upcoming events and other news around the conference and campus. If you are looking to potentially be a student athlete at Grove City, you could represent your team with the SAAC one day!