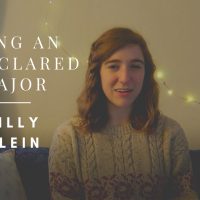 Sophomore student Lilly Klein knows what it is like to come into college without being set on a major. Although being undeclared can be stressful, Lilly says she does not regret the decision.

Lilly says she always knew she always enjoyed writing, but was not sure what career options would be available to her in the field. Due to this, she made the choice to hold off on choosing her major. She also says that she did not want to decide on a major and then have to change.
During her freshman year, Lilly took mainly general education classes that would apply to most (if not all) majors. During her sophomore year she branched out and took an accounting class. Lilly says that it was this class that helped her decide on a major. During that semester she declared an Accounting major with an English minor.
“I liked it a lot and I would nerd out about it with my mom and my friends. That’s what convinced me,” reflects Lilly.
She says she is grateful for her year and a half without a declared major because she says otherwise she might have never found her passion for accounting. Although her mom studied accounting, she had not considered it as an option for herself.
Lilly believes that the main benefit of being undeclared is that it gives the student a lot of flexibility and they can explore different classes without feeling like they are putting off classes in their major.
When asked if she has any advice for younger students faced with a similar situation to hers, she says, “Don’t be afraid of not having a major. I’d also say make sure you take a lot of diverse classes. One thing that I kind of regret is that I took a lot of required classes in my spring of freshman year. It wasn’t a bad decision necessarily because I got them out of the way, but it put off my decision-making process a bit more. Try to balance required classes with exploratory classes.”
Follow and like us:

Erica Kolson is a sophomore student at Grove City College studying Marketing. She is interested in writing about the different clubs on campus and highlighting individual students' journeys with their faith and career paths. She finds the medium of video to be very helpful in best capturing these experiences.
View all posts by Erica Kolson →
Campus Organization Spotlight: The Management Association
Being an Undeclared Major – Katelyn Bartley