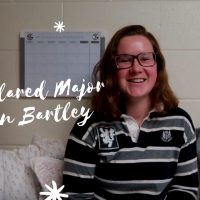 Sophomore Katelyn Bartley talks about coming to Grove City College without having a declared major. She says she decided to be undeclared because she was not confident in what she wanted to do for a career. Katelyn also felt that as a home-schooled student she had not explored all the options of possible career paths well enough to make an informed decision. She says she knew that she enjoyed some subjects she had learned about in high school, like English and History, but did not think that she wanted to pick a major based on that.

Katelyn says that as an undeclared major she was able to take different classes and learn more about her options for majors. She was able to avoid falling behind by taking a lot of required classes. One of these core classes was sociology and, from there, she developed an interest in social work. After taking more social work classes her second semester, she declared her major as Social Work.

Katelyn says she does not regret coming to college as an undeclared major. She says the decision was very helpful because she did not take classes she did not need by coming in as another major and then having to switch later on. She had the opportunity to take general classes that would apply to any major while exploring a few classes that sparked her interest. She credits this decision to not putting her behind in her major requirements now.

When asked if she has any advice for rising freshmen that are facing the same decisions, she says they should come in undeclared if they have a couple options and are unsure of one specific major. Katelyn points out that the professors are really helpful with students that want to explore options or have questions. She also says that student advisors are helpful in transferring from being undeclared to finding a major. She says that career services also personally aided her in her decision.

“There are always people here to give you advice and help you figure it out,” says Katelyn.

Erica Kolson is a sophomore student at Grove City College studying Marketing. She is interested in writing about the different clubs on campus and highlighting individual students' journeys with their faith and career paths. She finds the medium of video to be very helpful in best capturing these experiences.
View all posts by Erica Kolson →
Being an Undeclared Major: Lilly Klein
Women’s Rugby Team