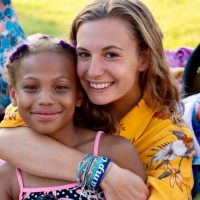 One of the many opportunities offered at Grove City College is the Camp Fair, an event that takes place in the early spring, providing information to students about the various camp opportunities that are offered from many different areas. This is where Alex Berrios, a sophomore elementary education major with a minor in Christian Ministries, received her interview and job placement as a camp counselor at Camp Carl in Ravenna, Ohio.

Alex spoke to me about her experience at the camp fair and how it helped open the door to this amazing opportunity. Camp Carl is a Christian summer camp run by Tom Sullivan who is a resident of Ohio. Mr. Sullivan reached out to Alex and came to Grove City College to interview her for this position. Not only did he leave the Camp Fair with Alex signed up as a camp counselor, but with 12 other Grove City College students as well. With 13 students from one school, it resulted in one of the largest, if not the largest, population of student counselors from one school.

From the Camp Fair experience, Alex was lead into a very fruitful summer. Throughout this 12-week summer camp, there were new age groups of campers rotated each week. Alex and her co-counselor were given between eight to 16 girls each week in whom they invested. Alex stated that she was able to, “witness to them the life of Jesus and demonstrate to them what it meant to be a ‘child of God.'” She was also given the opportunity to form close biblical related relationships with other staff members which she will cherish for many years to come.

From this unforgettable experience the camp fair helped Alex receive, she not only got to help encourage many campers in their walk of faith, but also continue to grow and strengthen her relationship with Christ. She was even given a night to speak and share her testimony to the campers. Alex highly recommends not only Camp Carl, but attending the Camp Fair as a whole.