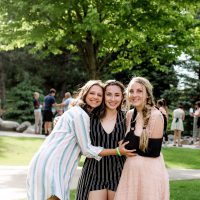 Young Life is a ministry organization with a mission to lead young children and teens to Jesus Christ and help encourage them in their walk of faith. Grove City College is highly involved with Young Life with over 70 leaders.

Bailey Mantzell, a sophomore majoring in Middle Level Math and English, is going into her second semester of being a leader on campus. She went to Young Life camps throughout her high school years, but dedicated herself to this ministry once she entered into college.

Over this past summer, Bailey had the exciting opportunity to be a leader at the Timber Wolf Lake Young Life camp. As I spoke with Bailey, she stated, “Young Life is such an incredible ministry, and the devil was so present throughout the whole week at camp, but God’s glory triumphed over all of the hardships, and unforgettable memories were made.” With many moving sermons given throughout the week, many lives are changed and given to the Lord; the ultimate goal of the week.

With many campers giving their life to Christ throughout this week, Bailey told me some very heart-warming stories. As she was at camp, she was reminded of the fact that you never know what situations some children or teenagers have gone through in their lives. Sometimes campers can look and act like they are fine on the outside, but once these leaders get to sit down and talk with them one-on-one, the brokenness inside of them prevails. These discussions between the campers and leaders can be life changing, Bailey described. One camper had an over three-hour long discussion with their leader, leading to the giving of their life to Christ.

Bailey’s camping experience also had some troubles, but the outcomes ended up overpowering them. The first night, unfortunately, started with one of her campers breaking her collarbone, but ended with that camper’s best friend (another one of Bailey’s campers) committing her life to Christ.

Overall, being a leader at the Young Life camp was an amazing and eye-opening experience for Bailey, along with all of those who attended. This organization has become such a large part in Bailey’s life, and she cannot wait to see the new opportunities that will come from it in the future.

View all posts by petersontl18 →
Life Changing Electives: The Seminar in Life Management
Grove City College Chapel Credits: How Does it Work?