By durensd19 on October 30, 2020 in Professor Spotlights, Transfer Student, Transition to Online 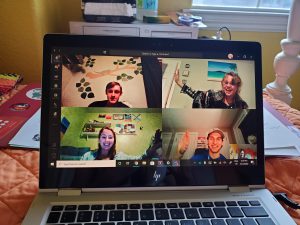 Before attending Grove City College, I was taking a full course load online through a community college. I did not mind online classes when I was taking them my first year of college. It gave me more freedom to have a job and travel. By the end of a year, however, despite my guzzling down textbook information, I did not feel like I was retaining much of what I learned. (Apart from business law, surprisingly most of what I learned in that course stuck- who would have guessed?) It was then that I began looking into going to a college in person, and poof- Grove City College fell out of the skies.

The professors here did a lot more than teach in person though. Most professors I had actually took time to get to know who I was. Getting lunch with professors, going over to their homes to study for finals or have tea, and having professors offer to pray and talk with students happens a lot here. While I first attributed this to perhaps being part of their job descriptions, many over summer would reach out and ask how things were going. Some even, unfortunately who do not work at the school any longer, continue to reach out and pray with me. My sole conclusion is that the staff at Grove City College authentically care, and feel it is their calling to teach and mentor us.

When the school needed to switch to online because of an international emergency, I think all of us students were wondering how it was going to go. Having done a year of online school in the past, I was not as worried about formatting as some of my peers seemed to be. Most of all, I knew it would be the most difficult for professors who were not all tech savvy and had about a week before they needed to transition their entire way of teaching online. The first couple weeks online were a little chaotic as many professors were figuring out which face call meetings worked best- Zoom or Teams or other programs. When quizzes and tests came, it was another big haul of decisions. Would the tests be open note? Would we do them while logged into the meeting? WiFi  was spotty where some students lived- how would those students be helped? There were lots of logistics to be worked out in a short period of time. I could tell a number of my professors were thin-stretched by all the changes.

Despite this, I still felt like I learned more through my time online with Grove City College than through my time online in my past school. The professors did not stop teaching, and they continued to do their best work. The high standard of education did not change, even though all of the circumstances did. There were immense amounts of grace as well. My parents were working in the medical field and could not stay home to help my seven year old brother with school, so often he would join me for my classes once his were over. When this happened, some of my professors would even keep him engaged and ask him questions about what we were learning in class.

Needless to say, I was thoroughly impressed by the teaching staff here at Grove City College over the past year. Many were pushed out of their comfort zones and had to change their methods very quickly, and from my experience they did a great job. More than that, we have a staff that authentically care about their students and want to know where each of them are at. I have not experienced this in many other places.