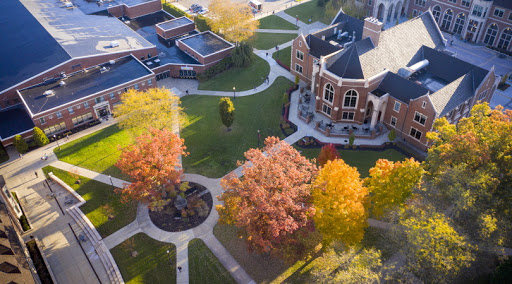 Grove City College is home to many different buildings, some old, some new. But something they all share is lore. Grove City has had students living within its walls for well over a century. Every building, old or new, has its fair share of stories and legends passed down through generations of students. Today I would like to share a couple of my personal favorite stories, along with an explanation about the buildings where they took place.

The centerpiece of upper campus is the Breen Student Union, more commonly called the SAC. SAC refers to the building’s old name – “Student Activity Center.” It is built in the same style as most of the 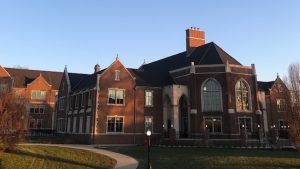 other buildings on campus, with red brick and grand gables. Inside, it is home to the GeDunk café, the campus bookstore, the offices of Student Life and Learning, and the mailroom. It is a bustling hub of student activity both day and night. But, below the SAC, lie the fabled SAC tunnels. While in reality they are simply storage for the GeDunk and used for transporting mail, there are rumors of students that broke into the tunnels and explored them. The tales tell us that the tunnels are not just below the SAC, but that there is also an abandoned section extending all the way to lower campus. While these rumors hold little truth, they still are spread to freshmen by mischievous upperclassmen. As with any tall tale, they get more absurd with every retelling.

The Great Escape from STEM

The newest and fanciest building on campus is the STEM (“Science, Technology, Engineering, and Math”) building. As the name suggests, this building is home to many of the Grove’s STEM programs. But even this building has seen some shenanigans. One of the events that takes place on campus each semester is Humans vs. Zombies (HvZ). It is effectively a

campus-wide, 24/7, week-long game of infection tag with Nerf blasters. The zombies try to “turn” all the humans by tagging them, while the humans try to defend themselves by stunning the zombies with their Nerf blasters. Participants play the game even while on their way to and from class, giving zombies opportunities to ambush humans. One such ambush took place towards the end of HvZ week one year. One of the last surviving humans had snuck into STEM. Shortly thereafter, zombies surrounded the building waiting for him to come outside. Due to concerns of safety and privacy, there are certain safe-zones for the humans – one of these is STEM. He was safe inside, but could not leave for fear of being tagged. However, one of the professors noticed his predicament. The professor had seen what was going on, and after the game was explained to him by the student, he hatched a plan. He helped the student climb into a large box that had been used to carry some equipment inside the building. He then loaded it onto a dolly and wheeled it outside. Despite the game, the zombies saw the professor wheeling the seemingly heavy box and offered to help him. He told them it needed to be taken to the dorm building where the student lived. The zombies, none the wiser, wheeled their cargo up to the student’s dorm where they left it. They returned to lie in wait for their target, who unbeknownst to them, was now safely situated in his room.

I hope you enjoyed this little peak into some of the stories of the Grove. Perhaps you’ll create some stories of your own during your time here.

View all posts by shirkjw19 →
Are You Ready to “Adult”?
Halls and Doors: the Hubs of College Culture