Some people see college as a new beginning, a chance to step into the next stage of life and grasp independency. For some, though, college is a chance to take control of where they were and did not want to be in the future… a preventative measure, one might say. Addie Slate, a senior double-major in Biblical and Religious Studies and Social Work, came to college with a “preventative measure” mindset. She said, “College was the next step to get me from where I didn’t want to be… I didn’t want to be at home and working at a low-paying job, and I wanted to be independent.” Addie entered into college assuming college was the means to achieve her goal, which was to avoid being where she feared ending up in life, but her college story does not end there. College became a valuable experience, an outlet of connections, and “one small stop on the path to where I want to be.”

“I thought, ‘This is going to be the worst thing ever,’ but it wasn’t!” Few optimistic expectations were set in Addie’s mind before coming to college. She expected it to be challenging, expected it to be lonely, and assumed failure. Rather, she discovered that college was, indeed, challenging but achievable and full of people who would love her through friendships deeper than she could have imagined. Sometimes it simply just takes time to find those people, and waiting can be lonely. Her initial low expectations propelled her to become exceedingly more passionate about her experience at college, which prepared her for her future in unpredictable ways.

When asked the question, “What has college provided you with, as you enter into the next phase of your life?” Addie said, “Friendships deeper than I could’ve imagined, people who care about me, both at Grove City College and surrounding, a deeper relationship with the Lord, and confidence in who I am and Whose I am.” Notice that none of these provisions directly correlate with her initial idea of college – “the next step to get me from where I didn’t want to be.” That is because what Addie was given through her experience at college did not prepare her to succeed in avoiding where she did not want to be, but rather, college provided her with an experience that empowered her to succeed in confidently knowing who she is, knowing Whose she is, and discerning the path that lies ahead…where she wants to be.

Addie’s piece of advice for anyone considering college or entering into a new phase of life is this: “Know where your identity lies and invest in that…everything follows after where your identity lies.” For Addie, that identity rests in Christ. Addie is a dedicated Young Life leader at Grove City College and said, “I would rather be serving the Lord and doing ministry than have a 4.0…not that I would have a 4.0 if I wasn’t doing ministry.” 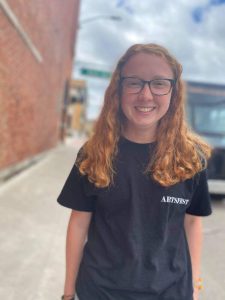