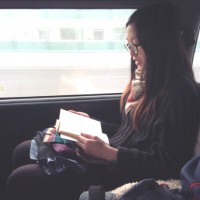 Agnes Tan, a sophomore History major, grew up in southern China and ventured to the States in 2014 to begin her college journey at Grove City. As someone with an international perspective and a genuine heart for learning, Agnes offers unique insight on what it means to be a Grover.

Where did you grow up?

Well, I’m Malaysian technically, but my mom and dad brought me to China when I was two months old. I grew up in southern China between the two big cities of Guangzhou and Shenzhen and we moved around a lot. I think I moved eight times in 14 years, but just from home to home in these two cities—so urban areas, not at all like Grove City.

What led you to Grove City?

I was home schooled and during high school I took classes from an online course provider called The Potter’s School that’s based in the States. I discovered that four of my English teachers had graduated from Grove City and I heard of it from other homeschooling families as well, so I decided to look it up.

What made you want to pursue history as your major?

I didn’t have a rigorous history education in high school and I’m not a history buff, but my mom runs a little school in China and I’ve just always been interested in designing curriculum and giving people the right books so that exciting things happen in their minds and souls and spirits. I discovered the Classical Christian Education minor here at Grove City, and after taking some of the history courses I realized that to plan a good curriculum I would need to know more information about the general scheme of events and be able to analyze things better. 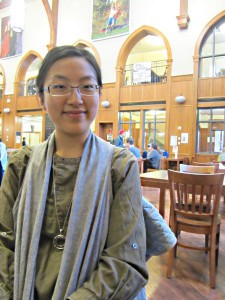 Has Grove City become a second home for you?

I would say it has. When I first came, Grove City blew me away by just how different everything was. The little houses looked so picturesque. It’s not at all like the 30-story apartment buildings that we have. It looked new and strange, but now I feel comforted when I walk outside and I know these trees, I know this landscape. I feel happy when I do that, so that’s a sign that it’s become home.

What do you appreciate most about Grove City?

There are people that are drawn to Grove City because they’re honestly pursuing the truth and the good, proper, beautiful things that Christians are called to look for. I’ve found a lot of these people in my classes, and their eyes sparkle when we talk about great ideas or star gazing. These people inspire me. Whether professors or students, they show me that a Christian life is rich, and I really appreciate that.

Faith and Freedom are the pillars of Grove City College, but is that combination pretty rare back in China?

Definitely. I just find myself constantly amazed here at Grove City, in the things I’m allowed to do and say. Sometimes I catch myself in classes thinking, “Wow! That student said something that’s very legitimate, but I would never have thought it was okay to say.” So I’m breaking boundaries I had set up for myself from my past environment and better understanding things like disagreeing in a Christian fashion, arguing, and searching for the truth. I think I might have settled for not doing that back home.

How do you stay connected with your family?

I have a pretty large family by Chinese standards. I have a younger sister, younger brother, and two of my cousins who live with us for education opportunities. So that’s my family. I stay connected with them through an app on my phone called WeChat. We have a family chat group and my family will send pictures, video clips, and voice messages. So it’s a huge continuous conversation. My brother will send a photo of his campus, my mom will send a photo of a new table cloth she bought, etc. And we Skype too. 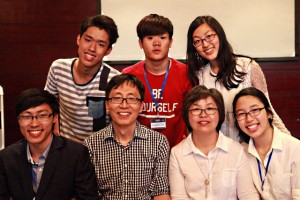 Agnes (top right) with her family

Who or what has helped you through the cultural transition?

The special, kind people that are drawn to Grove City who are genuine. They don’t gossip or create drama. They are just kind and welcoming. I have had so many people ask me about China, and that’s honestly blown me away. It wouldn’t occur to me that anyone would be interested, but a lot of my friendships have started with people being interested first in me, and then I just learn to mimic them and respond in the same way.

What do you think Americans can learn from Asian culture?

Well, since coming here, I have been pleasantly surprised often to find traits of what I would think of as traditional Chinese or Asian culture in the Christian body in America. Some of my friends on campus have shown me what gentleness looks like. Though I used to think, “Oh, Chinese people are quiet and meek,” I’ve come to realize that, “Oh, Christian people are quiet and meek.”  I’ve never met more tactful people than some of the people I’ve met here at Grove City. Those positives that I might have thought about, I realize they’re not cultural—they’re really Christ-like character traits.

What is your favorite American food?

Definitely bread.  We don’t have a lot of bread in China.  People might buy it and eat it as a snack, but you wouldn’t see it during lunch and dinner. Bread and butter, bread and soups, bread and salads—it’s just amazing to me. And Cheese! Cheese is completely foreign to me. I love rich hearty kinds.

Where do you see yourself in the future?

My plan right now, though that’s definitely up in the air, would be to go back to China. I primarily see education as a place for me, but coming to Grove City has taught me that I can educate people on more than just academics. I love food, I love the arts and the truth that is in there, and I want to be able to educate people in that as well when I go back. I want to live a life that is rich with beauty and then teach other people to live lives that are more full of beauty as well.

To find out more about the History Department, click here.

Emily ('16) is a Communication Studies major with minors in Spanish and Biblical & Religious Studies. Spending a semester abroad in southern Spain helped to season her interests in writing, Spanish, cuisine, and ministry, which she hopes to pursue in some creative capacity come springtime. She is a pun enthusiast who enjoys softball, jazz, photography, and Manchego cheese.
View all posts by Emily Rothbard →
Passions & Pathways: Career Spotlight on Abby Genzink
Grovers Abroad: Q&A with Raquel Fereshetian