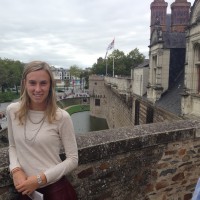 During her sophomore year at Grove City College, Samantha Parry (‘16) received an e-mail inviting her to apply to the college’s study abroad program in Nantes, France. Samantha, who had always wanted to visit Europe, decided that this opportunity was too good to pass up. 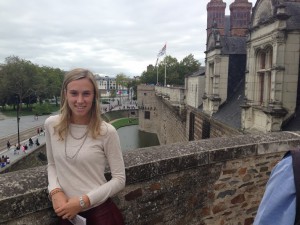 One of the unique aspects of the Nantes program is that it gave Samantha the opportunity to earn credits for her mechanical engineering major. Through one of her classes at the Université de Nantes, Samantha gained helpful insight into the field of engineering beyond learning technical skills.

“We took most of our classes through Grove City, but one class that we took with French students was called Engineering Management and it was basically learning about different cultures and then learning how to manage projects cross-culturally,” Samantha explains. “We learned about how cultural nuances can affect how you make a business deal or work on a project and things like that, so that was cool to learn about but also cool to get to know French students…I think that getting to know them, doing projects with them, and learning about French culture helped me be more objective in how I treat people and situations and I think that learning more of the business and personal relations side of things is something that engineers don’t really get through engineering school,” Samantha explains. “If you are going to be an engineer one day, you’re going to have to deal with things internationally. Technology is worldwide and it [studying abroad] gives you so much more of a global perspective that I think is really important for anyone, including engineers.” 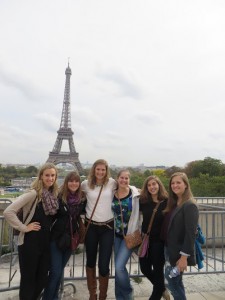 Samantha and GCC students in Paris

Although Samantha says that it was an adjustment to live in a different culture, she explains that Nantes became like a second home to her. She distinctly remembers a moment when she felt at home in France.

“I was out in town during the day and we went down to do some shopping and I think we went to get lunch crêpes,” she recalls. “Sometimes there are street performers, but on this particular day there was a whole drum line and choreographed dance group. They had all these different types of drums and there was a huge group of people around who were enjoying them. It was so cool that a lot of people took the time just to watch them. Even just that day, realizing that I could get around the city totally fine—I knew where to go, I knew where to shop, I had my favorite crêpe place—it was like it became my home city…being totally immersed and getting to the point where I felt really comfortable in the city and in a different culture and being able to enjoy it with them [the locals] was a cool moment.”

Not only did Samantha learn more about French culture, but she was also able to explore other European countries during breaks. One of Samantha’s favorite memories from her study abroad experience was meeting up with a Grove City student who was studying abroad in Italy at the time. 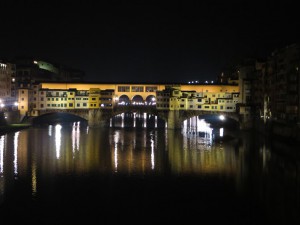 “The second [favorite memory] would be in Florence, which is the place we went during Thanksgiving break. I had previously contacted a Grove City student that was studying in Florence and we met up at the steps of the Il Duomo and he walked us around and took us to his favorite gelato place and then we sat on a bridge there, looking at the famous bridge in Florence. Sitting there, at nighttime, eating gelato, with someone else from Grove City in Florence at a popular landmark was surreal,” she says.

After returning home with gifts for her family members and a camera full of photos, Samantha says that she would love to go back to Nantes.

“If you would have asked me which country I would have wanted to study abroad in [before college], I wouldn’t have said France because I would have rather gone to Spain or Italy, but after going to France and living in Nantes, I realized how much I loved it and how much France had to offer. I learned so much and I loved it there” she says.

Learn more about the Office of International Education here.

Learn more about the mechanical engineering program at GCC here.

Anna Scofield (’16) is a communication studies major at Grove City College. Her interests include organizational communication, branding, and writing. During her time at Grove City, she has discovered her love for developing big picture ideas, visiting coffee shops, and exploring the power of written word.
View all posts by Anna Scofield →
Faith, Freedom, and Family
Rigorous Academics at GCC: A Student’s Perspective