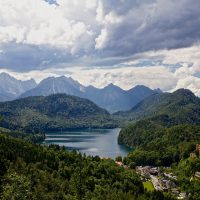 Ask any student, and they will tell you: Grove City keeps you busy. For the most part, it’s a good thing and a natural result of being at a rigorous school that also has many extracurricular opportunities — from clubs to IM sports to competitions to speakers to concerts. I am a tiny bit jealous, for instance, to have missed out on Os Guiness and Keith and Kristyn Getty. But only a tiny bit.

Of course, the main cause of the busyness is classes and associated assignments — which is a good thing, because students are in college to learn.

Grove City understands, however, that from time to time what we need as students — more than another paper to write or exam to take — is a nice long break. It’s actually a biblical idea:

For everything there is a season, and a time for every matter under heaven. (Ecclesiastes 3:1, ESV)

In the fall, the big break is Thanksgiving break, and it lasts a week. The dorms close and everyone goes somewhere, usually home. (We also get a few days off earlier in the term, but the dorms remain open so a small minority of students stay on campus — usually those for whom travel would not make sense.) In the spring, we have a short and a long break as well; this year, Easter is the short break and we have the week-long spring break in early March. It’s a time to relax and see family and friends, and maybe catch up on some work if needed.

When I came to France for the semester, I knew I would miss Thanksgiving at home. But I also knew I would get the opportunity to see more of Europe. It proved to be a most extraordinary break.

It all began Friday morning with a quick run to the laundromat. I’d had an extremely busy week, culminating in a Control Systems exam the day before. Dr. Bright, our department chair, had been with us the entire week and so the electrical engineers had some class exercises to do with him that we hadn’t been able to do remotely. On Wednesday, Dr. Bright took us on a field trip to La Rochelle.

Unfortunately, I gave my traveling partners a little scare, as they checked to see if I was ready to go and found the room vacant. It all worked out, however; I folded and packed my laundry and was ready to roll in short order, and somehow did not forget anything important.

We started our break in Munich, Germany. The flight there was uneventful, though we had a layover in England and the folks there were confused as to why we were going to Germany and not the motherland. We said nothing of the Revolution. In fact, I would have loved to visit on a weekend trip, but it didn’t pan out; when I heard my friend Sam, who had taken some German in high school, was planning a trip to Germany, I knew I wanted to tag along. I have heard great things from friends about Germany, and it was definitely a good choice.

By Friday at 11 p.m., we had found our Airbnb and made a game plan for the next day.

Over the next three days, we hit a lot of highlights in Munich: We dined at the Hofbrauhus, visited the Dutchess Museum, saw the BMW Welt, walked through the Olympic Park, and visited the concentration camp at Dachau — a sobering experience. (The entrance to the camp proclaims, in German, “Work will set you free.”) 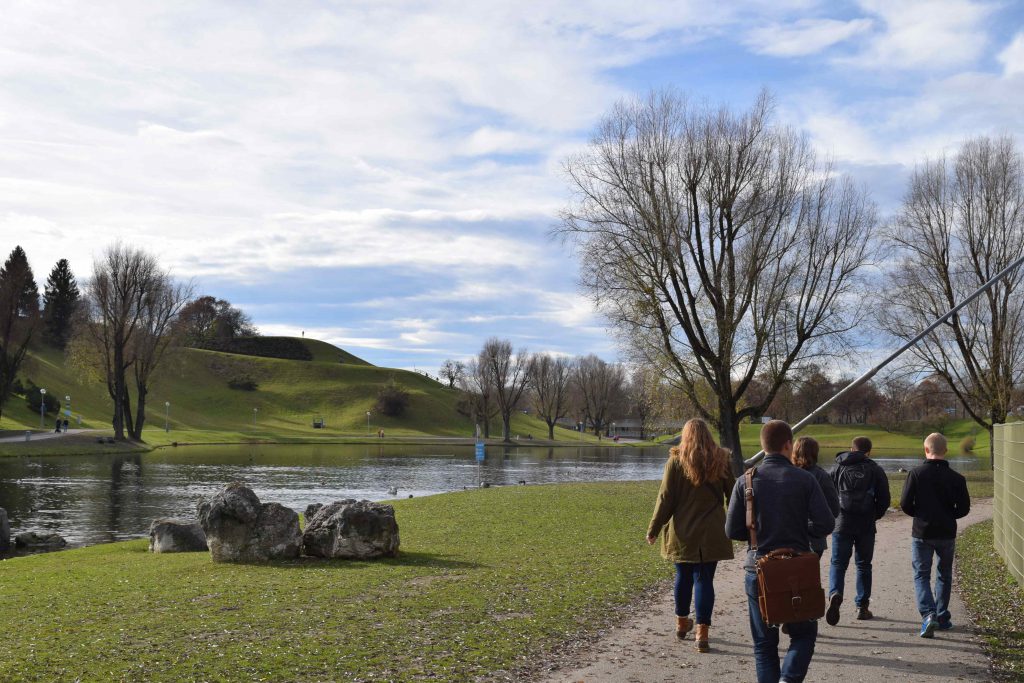 Strolling through Olympic Park in Munich 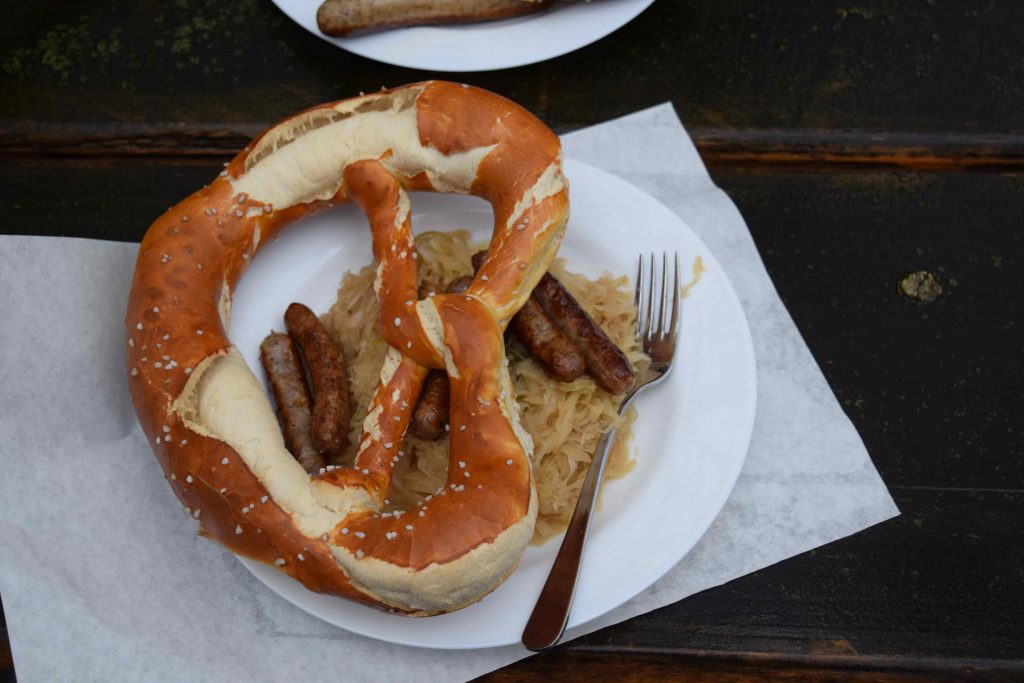 I’m a big fan of Christmas markets, and got this German sausage with sauerkraut and a pretzel. Delicious!

On Sunday, I went with one of my friends to Munich International Community Church. It is always encouraging to me to see faithful churches all across the world — the pastor certainly didn’t pull any punches unpacking the second half of Colossians 3. Afterwards, I joined some of the young people at that church for dinner at the nearest Subway. We came from all over the world, but shared a common bond in Christ, and had an enjoyable hour together.

On Tuesday, we went to Neuchwanstein, a castle that inspired Disney. For this day, we met with four other friends who were passing through Germany. The trip took all day, as we had to take a train to Füssen and then a bus to the castle. It was definitely worth it! I found it particularly interesting to see how much Ludwig II had been influenced by Wagner; he was obsessed with the Ring Cycle and a surprising amount of the art in the castle reflected this style. 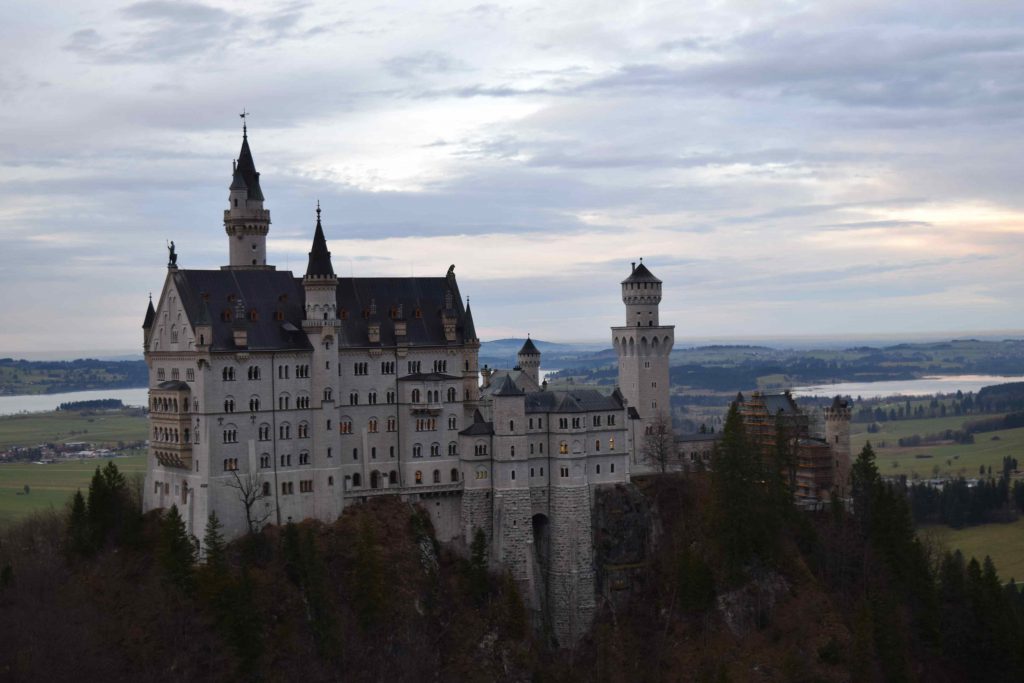 On Wednesday, our traveling band of six was cut in half. We all had different plans for the rest of break. I was with a group of three headed for Salzburg, where we arrived around 10 a.m.

Salzburg was my favorite city of the semester. The city is literally set in the Alps. It is also where The Sound of Music was filmed. (Of course, we had to watch the movie the following evening!) We spent the day walking around: We spent a good bit of time in the Salzburg Cathedral, which I think was the most elaborate cathedral I have ever seen; we stopped at the Christmas market, where we got some great food and I got a Christmas ornament; and we took a little hike up into the mountain, which afforded a beautiful view of the city, and of the surrounding mountains. 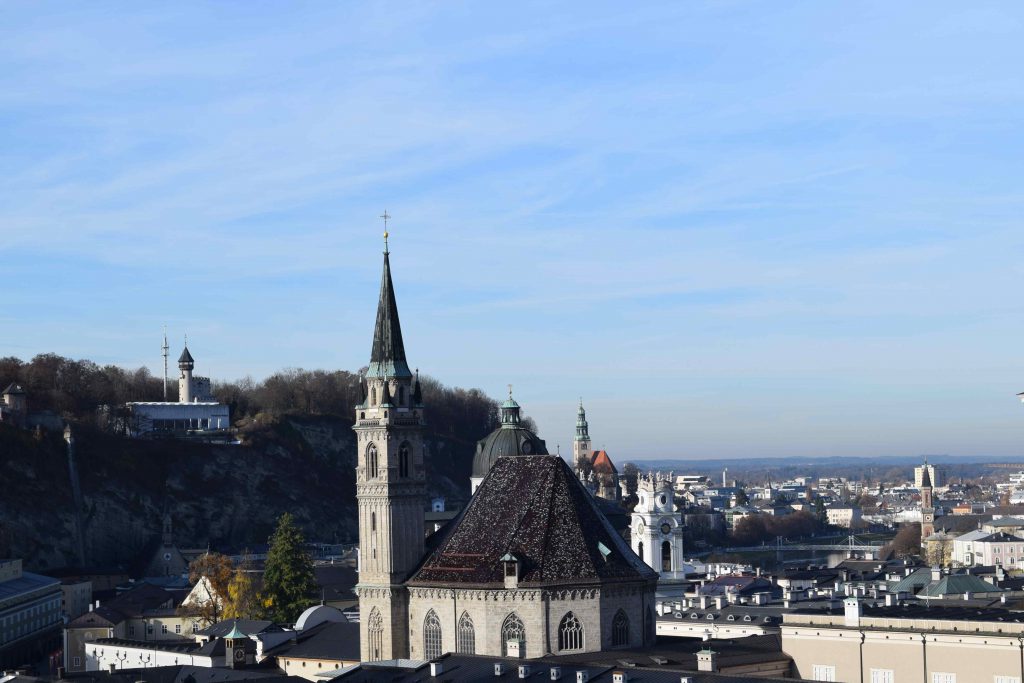 An afternoon view of the city of Salzburg 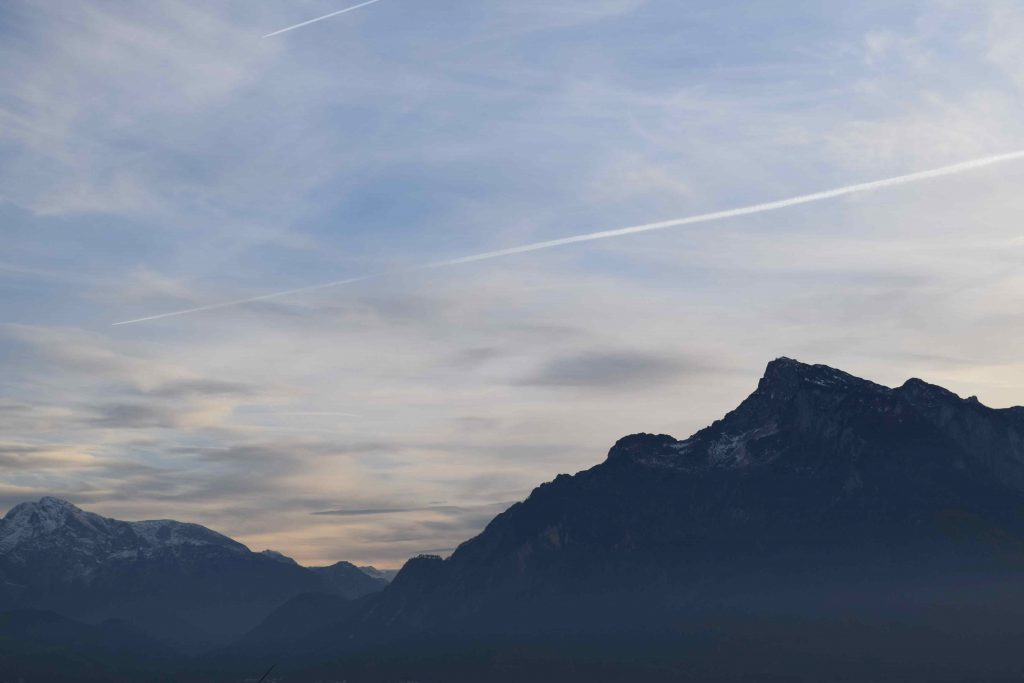 We watched the sun set behind the Alps.

That night, we took a train to Vienna. We arrived to our Airbnb at a reasonable hour, and spotted the Aldi a block away. The weather was not great on Thursday, but we walked around the island and I got some pictures. On Friday, we went to an art museum, and I could not believe my eyes: three self-portraits of Rembrandt, a room filled with Pieter Bruegel’s works… it was almost too good to be true!

Later on Friday, our friend from Italy arrived and we prepared dinner for everyone at our Airbnb before heading out for a concert.

On Saturday, I left my camera behind. I forgot it and remembered just down the street, but decided to leave it behind; there is more to a memorable break than a camera could ever capture, anyway, and sometimes it is more of a drag than an aid. I do not want to always see the world through the lens of my DSLR.

We went to Schönbrunn Palace and then visited some other spots. As evening came, we visited one of the Christmas markets, where we got dinner (spätzle for one of us and sausages for the others) and did a little gift shopping. I found some nice things for family members.

On Sunday, we flew back, but took advantage of our layover in Brussels. It was a little crazy, but we managed to get from the airport into the city and then back without missing our flight. One person on the trip knew two high school friends who were studying there and were happy to show us around. If we had figured out the luggage-storage spots or the ticket machines faster, we might have had more than an hour downtown, but it worked out and was certainly more fun than sitting in the airport for a couple hours. Plus, who doesn’t like adrenaline?

Of the three Thanksgiving breaks I’ve had during my time at Grove City, this was certainly the most unconventional. There was no family, no turkey, and no football. But what a break it was!

However, I’m also glad to be back: As I write, I have just less than two weeks here in France. I’m committed to making the most of it! I’ve got homework, yes, and finals… but also thirteen more days to say bonjour, to go downtown, and to thank God for this incredible opportunity.

Back to the stacks,

Alex is a junior studying Electrical Engineering with a Computer Concentration. In his spare time, he enjoys making music on the piano and the guitar, reading a good book, coding, and always a good meal with friends.
View all posts by Alex Watt →
Why I Decided to Be An Resident Assistant (RA)
A Virtual Way Through the Crowd